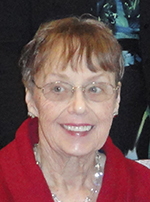 A celebration of life for Shirley will be at 10:30 a.m. Wednesday at United Lutheran Church in Walters with the Rev. Don Rose officiating. Visitation will be from 5 to 7 p.m. Tuesday at Bruss-Heitner Funeral Home in Wells and will continue one hour prior to the service at the church Wednesday. Interment will be at Trinity Cemetery in rural Kiester. Bruss-Heitner Funeral Home in Wells is assisting the family. To leave an online condolence, visit www.brussheitner.com.

Shirley Donna Elvebak was born Aug. 2, 1932, to Sidney and Alma (Sime) Flo on a farm in Eden Township. She graduated from Kiester High School in 1950. Following graduation, she worked in Albert Lea.

Shirley married Mearald Elvebak on Sept. 2, 1951, and moved to Walters where they farmed and raised four children. Shirley loved her garden, especially her flowers, baking, playing cards with friends and spending time with the grandchildren. For 20 years the couple loved spending winters in Apache Junction, Arizona. She had a strong faith and a deep love for her family.

The family would like to thank St. John’s Lutheran Community, the Meadows and most recently the Woodlands  for the wonderful care of their mother.