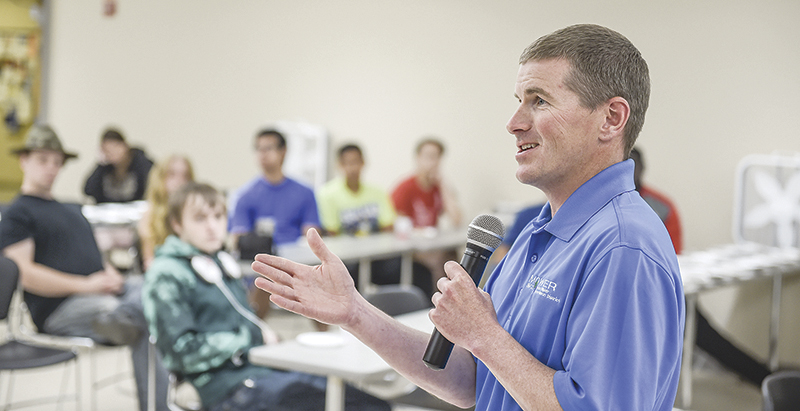 Justin Hanson, district manager for the Mower County Soil and Water Conservation District, talks about the partnership between the SWCD and Riverland Community College at the unveiling for the new soils lab at the college. - Eric Johnson/Albert Lea Tribune

Students, instructors and even farmers, were present for the kickoff that took place inside the college’s new soil lab that was being developed by the new Center of Agricultural and Food Science Technology. As conversations surrounding water quality in the area have been an ongoing topic for years, scientists and researchers in the agricultural sciences have started working with watershed experts to understand more about the land that is considered unique in southeast Minnesota. Dan Hoffman, interim director of Riverland Center of Agricultural and Food Science Technology, said that research into healthier soil could support new agricultural practices in the region.

“Soil is living and breathing,” Hoffman shared with the attendees during the kickoff. “We are on our way.”

The new soil lab will be fully equipped by late summer, which has been in use by Mower SWCD for storing and analyzing soil samples that were collected from dozens of plots that represented different types of farmland in Mower County. This study — led by Mower SWCD certified soil scientist Steve Lawler — would establish baseline data and start measuring soil-property change over time as soil-health practices are incorporated. Researchers will quantify typical soil properties in agricultural use before land-use changes to measure different conditions. Data that’s collected from the project would also be incorporated in evaluation farms and the land-use decisions made specifically for agricultural land.

“Agriculture always has played a big role in Mower County and surrounding counties,” Lawler said, “and together our efforts will support farmers who are making changes to their agronomic practices.”

Last year, Mower SWCD was approved for a $98,000 grant from The Hormel Foundation to conduct soil-health research and observing the benefits of incorporating cover crops and other practices into farming operations. The project will match the foundation’s grant — about $200,000 overall — with state “capacity” funds given each year by the Minnesota Board of Water and Soil Resources and in-kind services from partner agencies.

Riverland students would research several soil-health practices such as cover cropping, only tilling strips on a field before planting and no tilling to reduce erosion.

“Riverland has established a strong tradition of partnerships related to agricultural needs facing our region,” said Adengua Atewologun, Riverland president. “As an educational partner, a research project like this incorporates a major step toward our overall vision for the Agriculture and Food Science Technology Center. We are so grateful to The Hormel Foundation and Mower SWCD for making this project possible. Our students will benefit from learning experiences like this.”