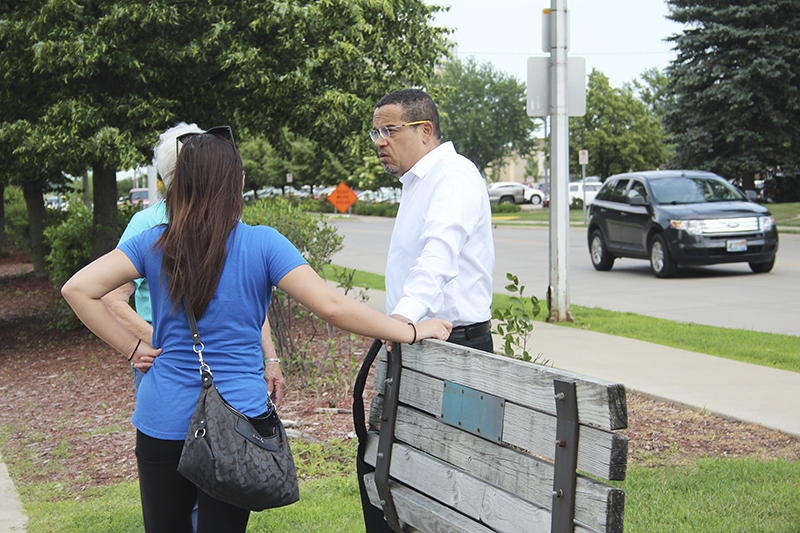 On his run for state attorney general, a U.S. representative is making his way through what he sees as “one Minnesota,” including a stop at Mayo Clinic Health System in Albert Lea Friday.

According to U.S. Rep. Keith Ellison, D-Minn, who represents the 5th Congressional district, he is intent on protecting consumers.

“Consumers need a people’s lawyer who’s going to fight to make sure they keep the money that they earn,” Ellison said. As part of this, he mentioned protecting individuals from being taken advantage of by payday lenders, banks and mortgage fraudsters, as well as people suffering from wage theft.

“We want to make sure that we’re standing with workers, and that’s about the wage theft,” he said. “I believe workers in the state of Minnesota need an advocate who’s going to stand up for them, their rights.”

To the group of those he said he is advocating for, Ellison included — among others — senior citizens, citing exploitation with high-pressure sales tactics as a civil rights issue, and farmers, citing the state attorney general’s authority in antitrust enforcement.

Ellison’s platform for state attorney general also includes health care as an expressed focus. While Ellison spoke of dealing with opioid addiction and access to mental health services, he also spoke to Mayo Clinic Health System’s transition of most inpatient services from Albert Lea to Austin.

“That’s why I’m here,” he said. “I mean, I know there’s folks out here trying to save the hospital, and I’m concerned about that because I think customers, and to me, that’s a consumer justice issue. Consumers need that access, and it’s an expense in time and resources for people to have to leave Albert Lea and go all the way to Austin to get the services they need.”

Specifically, Ellison said his trip to Albert Lea and to the sidewalk in front of Mayo Clinic Health System was to listen to people.

“I believe in one Minnesota,” Ellison said. “I believe that the Minnesota attorney general ought to be fighting for Albert Lea, Austin, ought to be fighting for Faribault, Owatonna, and every, every corner of the state. There shouldn’t be one county attorney or one citizen who feels like they don’t have the backing of the attorney general,” Ellison said. “We’re going to be there for people.”