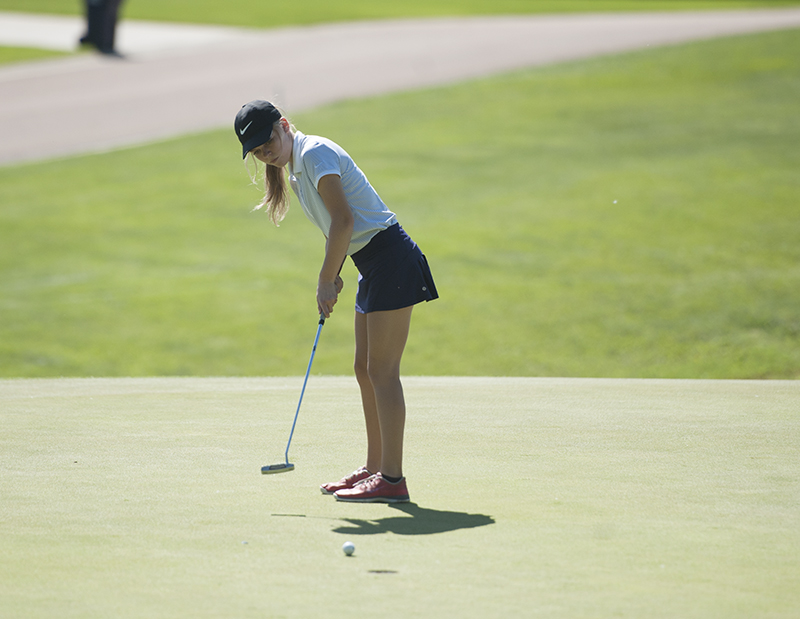 Albert Lea junior Emma Loch watches her putt drop into the hole Wednesday afternoon during the second round of the Class AA girls’ state golf tournament. Loch would end her second round with a score of 100. - Tyler Julson/Albert Lea Tribune

Loch found herself in a tie for 69th place to start the day, after scoring a total of 99 in round one. Through the first nine holes of round two, Loch shot her best nine-hole score of the tournament, carding a 47. However, she would stumble a bit through the back nine, catching a few tough breaks that put her in challenging positions.

She shot a 53 in the back nine, bringing her round total to 100 and her final tournament score to 199 (49-50, 34-32). Loch’s struggles on the final nine holes would only drop her one spot in the standings, however, as she finished the tournament in a tie for 70th place. 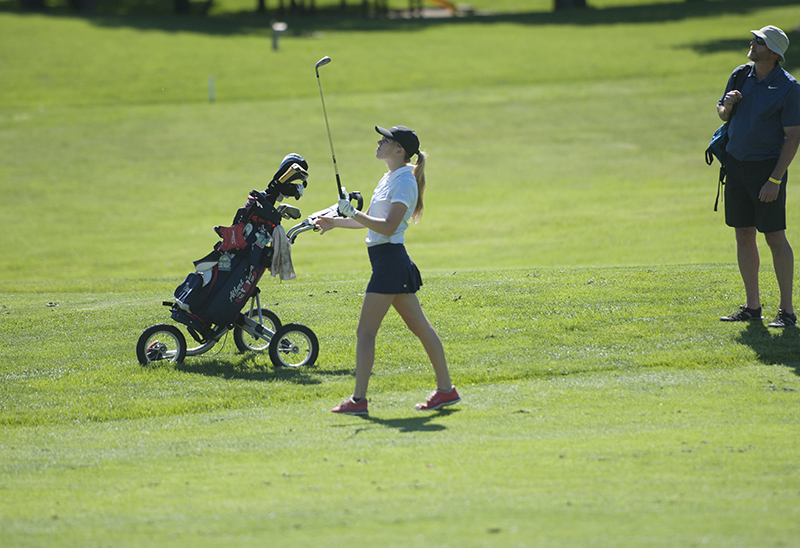 Albert Lea junior Emma Loch watches her shot from teh fairway midway through the second round of the state tournament in Jordan. Loch finished the tournament in 70th place with a final score of 199. – Tyler Julson/Albert Lea Tribune

Pyzick was the only returning state qualifier in the Tribune’s coverage area this season, finishing last year in 65th place in the Class A tournament.

She started the second round this year in 51st place, after shooting a round one total of 102. Pyzick would also have a tough time in her final round, scoring a 52 on the front nine and a 53 on the back nine. She fell back four spots in the standings to 55th place overall, finishing the tournament with a score of 207 (48-54, 52-53).

Although she fell back slightly in the second round, her 55th-place finish marked a 10-spot improvement from her finish one year ago.

Riebe, the youngest of the Tribune’s coverage area qualifiers, had her work cut out for her in the second round of the tournament. She started the day in 75th place after a first-round performance of 111.

Riebe started her second round the same way she started her first round, recording a 61 through the back nine holes. In the first round she was able to respond by shooting a 50 to close the round. Although she couldn’t quite repeat her performance from Tuesday, she did significantly cut back on her strokes, finishing with a 52. Riebe tied for 78th place overall with a final tournament score of 224 (50-61, 52-61).

The winner of the Class A tournament by just one stroke was Lac qui Parle Valley sophomore Rachel Halvorson, with a final score of 155 (37-39, 36-43). Halvorson also led the field throughout the entire tournament.