A memorial service for Thomas and Betty Butsch will be at noon Saturday at Christ Episcopal Church. 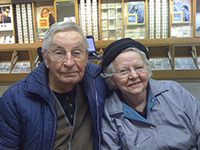 Tom was born in 1918 in Springfield, the son of Josephine and Al Butsch. After graduating from Owatonna High School, joining the National Guard and working for three years at his father’s hardware store, he moved to Albert Lea to attend junior college. While there he met Albert Lea native Betty Wayne, the oldest daughter of Irvin and Georgiana Wayne.

Their life plans changed on Dec. 7, 1941. Because he already had some military training, Tom was selected for officer training school at Fort Benning, Georgia. After completion, he was commissioned as second lieutenant and assigned to the 350th Infantry Regiment of the 88th Division at Camp Gruber in Oklahoma.

Betty joined him in Oklahoma, and they married in 1942. He received additional training and when the 88th was deployed in November 1943, she returned to Albert Lea. He arrived in Algeria, where he received extensive mountain training before being shipped to Italy, where he survived infamous battles in Anzio, Pomarance, Arno River and Po Valley without injury. After the war, he stayed in the Army, serving in Korea; Turkey; Japan; Kaiserslautern, Germany; Burtonwood, England; and stateside at Fort Monroe, Virginia, Fort Campbell, Kentucky, and Fort Knox, Kentucky; 5th Army headquarters in Chicago and the Presidio in San Francisco. He retired as a colonel in 1970 after 30 years of service.

Betty accepted the various responsibilities of an officer’s wife and raised two children, Tom Jr. and Sally. Whenever Tom Sr. was deployed on a hardship tour, she and the children moved back to Albert Lea to be near her parents.

The couple retired in San Francisco, where Tom worked for several years as a technical writer for a company that wrote Army manuals and Betty earned a bachelor’s degree in psychology at Lone Mountain College. A few days before their 75th wedding anniversary, Tom died. Betty died a few weeks later.

They are survived by their son, Tom Butsch, and his wife, Joan Claire Graham; their granddaughters Jennifer Paige and Susannah Becket; Jennifer’s husband, Mike Hallenbeck; Susannah’s husband and son, Chris and Calvin Kula; and several nieces, nephews and cousins. Betty is also survived by her youngest brother, Tom Wayne.