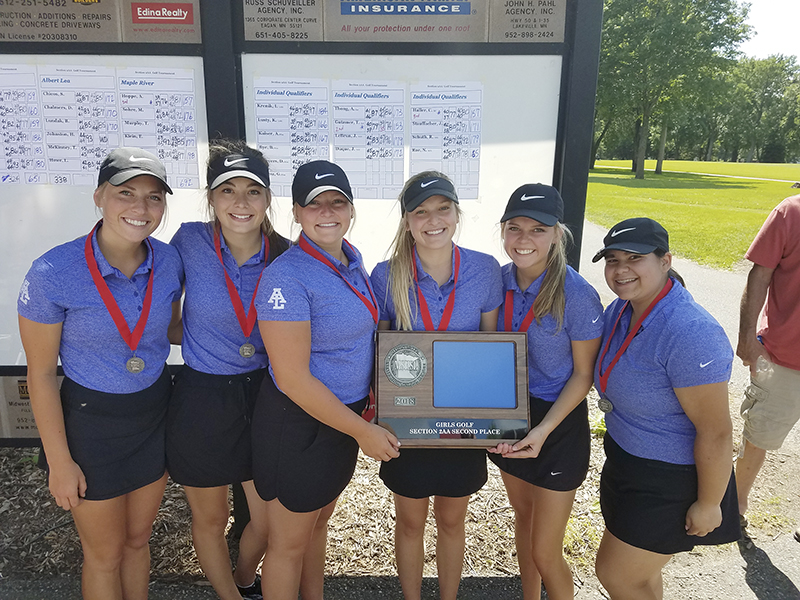 The Albert Lea boys’ and girls’ golf teams each played in the second round of their respective section tournaments on Monday morning, with only one player qualifying for the state tournament next week.

As a team, the girls’ would finish second at the meet, 45 strokes behind first-place Jordan. Individually, junior Emma Loch finished the last hole of regulation tied with another golfer, putting her into a playoff for the final spot at the state tournament. Loch came out victorious after the first hole, winning 5-6.

The winning score for the girls’ tournament was 164, which came from St. Clair junior Claire Orcutt. Loch will play in the state tournament starting June 12 at Sand Creek Golf Course in Jordan.

The boys’ team finished third place in the section after starting the second round in fourth. The Tigers finished the tournament with a score of 681, 30 strokes behind St. Peter and 38 strokes behind first-place Blue Earth Area.

Leading the way for the Tigers was sophomore Logan Howe, who finished in 14th place with a score of 169. Senior Bergan Lundak and sophomore Danny Chalmers tied for 15th place, each finishing with scores of 170. Senior Spencer Chicos carded a 172, tying him for 18th place; and eighth-grader Tucker McKinney finished 35th with a score of 195.

Winning the individual title for the boys’ tournament was Blue Earth Area freshman Manning Lane with a score of 148.