Pre-trial hearing scheduled for man who allegedly threatened with gun

A pre-trial hearing is scheduled for a Mankato man charged with threatening someone at gunpoint over a $70 debt last June in Wells. 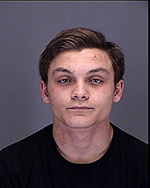 Court documents state Spooner was charged after a Wells police officer was dispatched June 20, 2017, to a Wells address on a report of a disturbance.

The alleged victim met the officer outside the residence and said Spooner had a gun, an accusation Spooner denied.

That person said Spooner came into the apartment, cornered him, pointed a black pistol at him and threatened to kill him before walking out.

Another witness said she heard arguing and someone say death threats. Court documents state she saw Spooner leave the building while shoving something inside his pants, and “she said she was pretty sure it was a gun,” documents state.

Another witness reportedly said she saw Spooner leave but was unsure if she saw anything in his waistband.

Court documents state Spooner admitted he arrived to collect $70 from the alleged victim but denied having a gun, saying he had a coffee mug in his hand.

Law enforcement reportedly did not find either a coffee mug or pistol.

The pre-trial hearing is scheduled for July 10. A jury trial date has not been set.