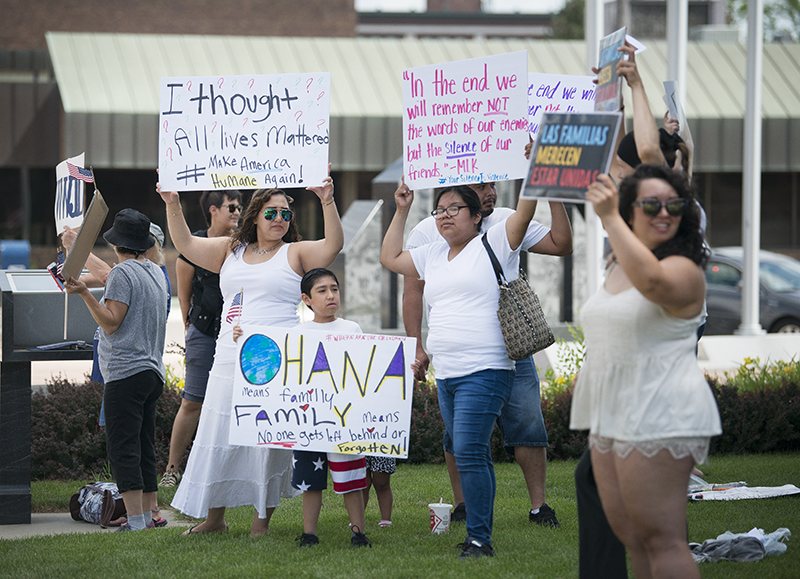 Approximately 70 to 80 people attended a rally Saturday outside Freeborn County Government Center denouncing President Donald Trump’s and his administration’s recent implementation of the Zero Tolerance policy on illegal immigration that led to the increased separation of children from their families.

The rally was organized by Albert Lea resident Bill Busse to mark the county housing Immigrations and Customs Enforcement detainees. The event was done in connection with a nationwide Day of Action against Trump’s immigration policies.

Trump has since reportedly ended the separation of children from their families at the border.

He urged rallygoers to help pay the bail of ICE inmates, adding the stance the administration has taken on immigration is not indicative of the country’s values. 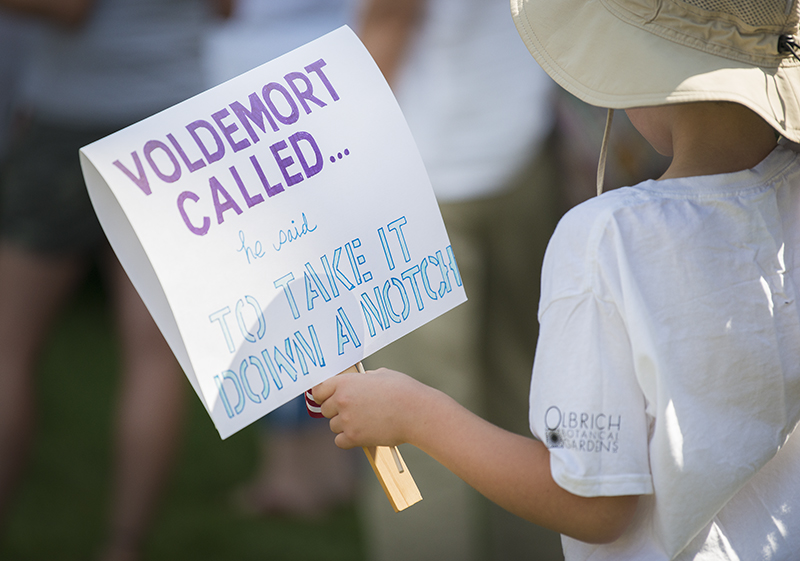 A Harry Potter-themed sign reading “Voldemort called, he said to take it down a notch” is held up during a rally against ICE and national immigration policies Saturday. Colleen Harrison/Albert Lea Tribune

Sara Karki of the Immigrant Law Center of Minnesota noted a number of immigrants are fleeing violence in their home countries and decried what she said was the “dehumanization of immigrants.”

District 57A Rep. and Lt. Gov. candidate Erin Maye Quade, DFL-Apple Valley, said she will one day be asked by her children what she did to help immigrants.

“We’ve got a big fight on our hands, and we know that.”

Candidate for District 27A Rep. Terry Gjersvik noted his father was an immigrant who originally could not speak English but was assisted by the U.S. government and bought the farm where Terry Gjersvik lives today.

“It’s good to see people out, and hopefully we’re able to persuade more before November,” he said.

Marlene Hanson of Blue Earth said she attended the event because of “the children.”

“We’re concerned about the children and splitting families up,” she said. 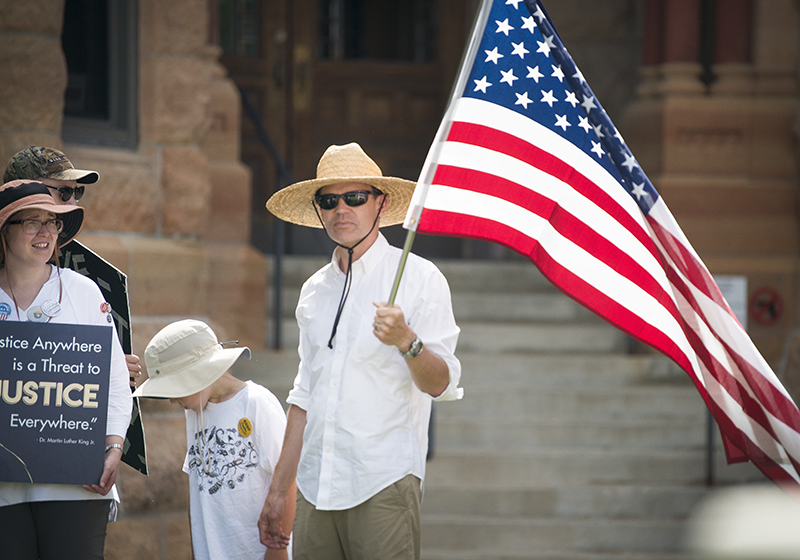 Hanson said she attended the event in Freeborn County because it’s the closest such rally to her. She said Trump needs to resign for the immigration situation to be improved.

“We need a different president to begin with,” she said. “He needs to step down.

“He has no heart. I don’t understand where he comes from. We are a nation of immigrants. We need immigrants.”

Cara Schultz of Mapleton attended the rally with her husband and two children. The family had signs calling for the abolishment of ICE and the reunification of families at the border and the ending of family detention.

“They are a government agency that has gone unchecked for years,” she said of ICE. “They have been given too much carte blanche to just go ahead and enact policies that are not in our country’s best interests.

“Given that they are unchecked, it would be better to abolish and start over again.”

Schultz called for immigration reform and Republicans and Democrats to revamp immigration policies together.

“These people are trying to come to this country to find asylum, to find safety from their harsh conditions, so there is no reason that we can’t find a better answer where they can lawfully enter our country,” she said.

After the rally, Freeborn County Sheriff’s Office Chief Deputy Todd Earl said if ICE is abolished, there needs to be a plan to replace it, adding the policies of any organization created in its wake would likely be the same.

Earl said it is important immigrants enter the country legally.

“That is part of what we’re based on,” he said.

“There’s a process for people to get in this country.”

“Our economy cannot sustain the huge influx of illegal immigrants coming into this country,” he said.

“It’s a sad fact. We’ve got a lot of elderly people who are starving, homeless veterans who aren’t getting help. There has to be a stopping point.” 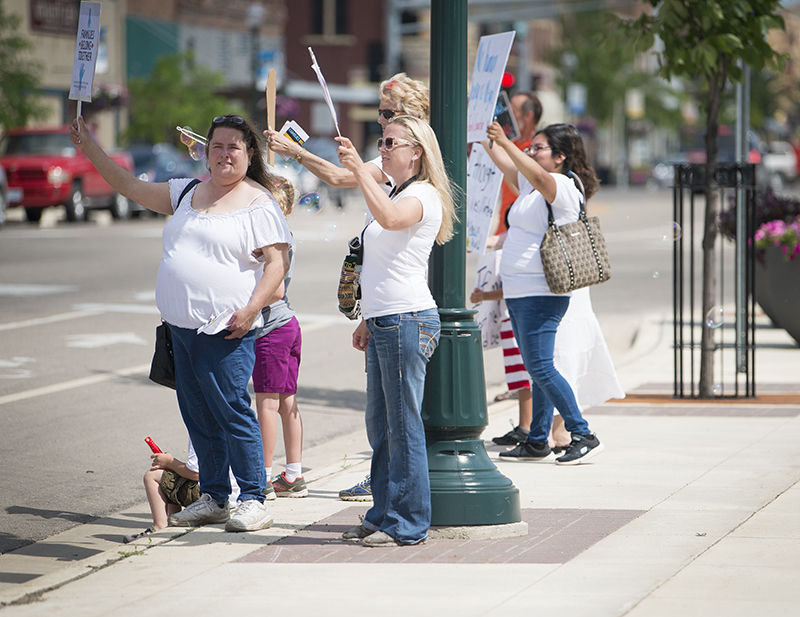 Schultz said she was trying to teach her children to stand up for what they believe in and expressed disappointment that Freeborn County has a contract to house ICE detainees.

“There is a lot of money when it comes to ICE contracts, so I sort of understand from that perspective, but money isn’t everything,” she said.

Earl said the county does not have an ICE contract solely for financial reasons, adding it is a requested “service to the country.”

He said the contract supplies jobs for local people, benefiting the economy and providing an essential service.

Tanya Hoskin of Rochester attended the event with her family, carrying signs decrying Trump’s immigration policy. She said immigrants separated at the border were seeking asylum or were only committing a misdemeanor.

“This is being done in the name of the U.S. government, and so we feel that it’s every citizen’s responsibility to say this not OK, this is not right, and we’re not OK with it.”

After the rally, Busse said he organized the event after seeing families in detention and children being torn from their families, which he said reminded him of Nazi Germany and comments made by people after the regime asking what they would have done if they were in Germany at that time.

“It was just echoing too strongly,” he said.

Earl said he doesn’t see the parallels between Trump’s immigration policies and Nazi Germany, adding though the country is accepting, it needs to make sure it carefully vets refugees and immigrants to prevent terrorist attacks like those in Europe.

“To compare us to Nazi Germany, as far as I am concerned, is absurd,” he said.

Busse said he was not sure if Freeborn County residents knew the county benefits financially from its ICE contract and called on the country to soften its attitude toward immigrants.

Earl said rallygoers were respectful and cleaned up after themselves after the rally. 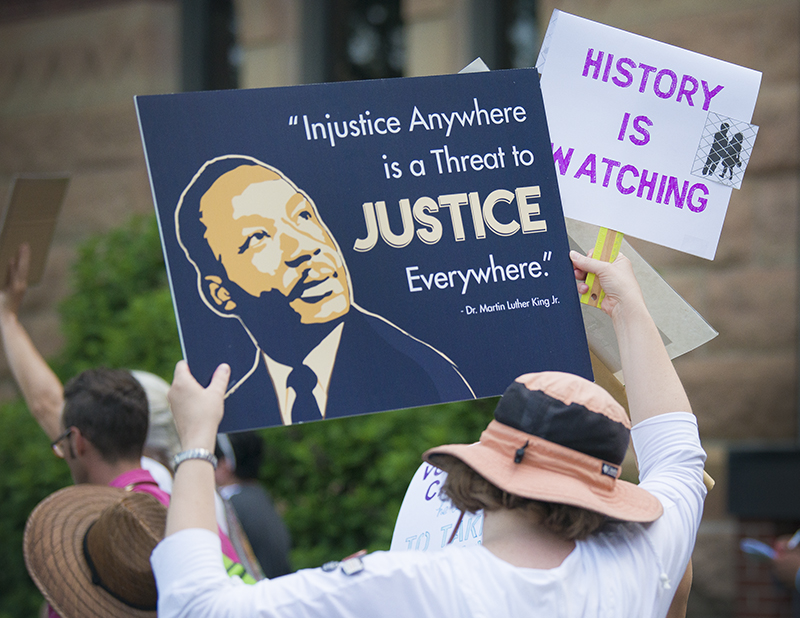 Signs reading “Injustice anywhere is a threat to justice everywhere” and “History is watching” are held up during Saturday’s rally. – Colleen Harrison/Albert Lea Tribune