Wells musician may be late to party, but tries to bring it with him 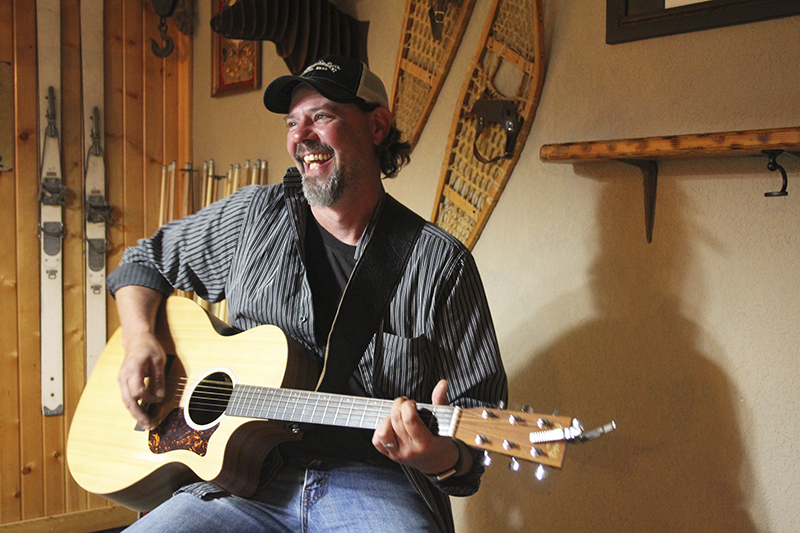 Wells guitar player and singer Brett Feist picks for a picture Tuesday night in the Bend in the Road, where he performs about every six to eight weeks. Sarah Kocher/Albert Lea Tribune

Back in the first few days when the electrician and foreman was on stage, he was holding a bass he was not quite comfortable with. If you were listening, it might have been hard to hear how he was contributing. He was a bass player who didn’t know how to play bass.

“We just turned the volume down and I moved my fingers,” Wells musician Brett Feist said.

That was when Feist was playing with the Circuit Breakers (three members were electricians). They were together for 10 years, playing a lot of street dances and town festivals. In his opinion, they got pretty good. 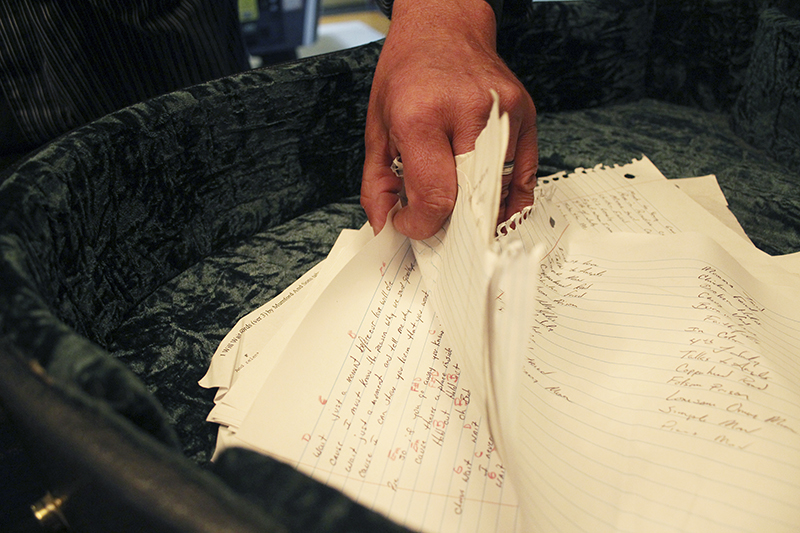 Brett Feist leafs through some of the papers that sit underneath his guitar in the green crushed velvet case. Some are songs, some are set lists and some are just miscellany, Feist said. Sarah Kocher/Albert Lea Tribune

“And that’s how I wound up, unknowingly, unwittingly, onstage, I guess,” Feist said.

Now, at 46, it has been almost 20 years since Feist taught himself the guitar — with a lot of help from friends along the way, he said — and two years since he started playing solo with his Martin acoustic.

At the beginning, he was playing a cheap, used acoustic Alvarez guitar, which he bought in about 2000 when he was 27.

“I think it’s a very late start compared to a lot of guys that have had maybe lessons in high school or elementary school, or started their guitar as their first instrument.”

Feist’s first instrument was the trumpet. He played in the high school band, but it wasn’t where his heart was at.

“I always wanted to play the guitar, because you see it on TV and hear it on the radio,” he said.

He tried to teach himself when he was younger, but it didn’t stick.

“I guess I was more determined, when I was older, to figure it out,” Feist said.

That first guitar made its way into Feist’s hands after he moved to Hartland.

“I bought the guitar basically to keep myself occupied, so I didn’t run around all the time,” he said. 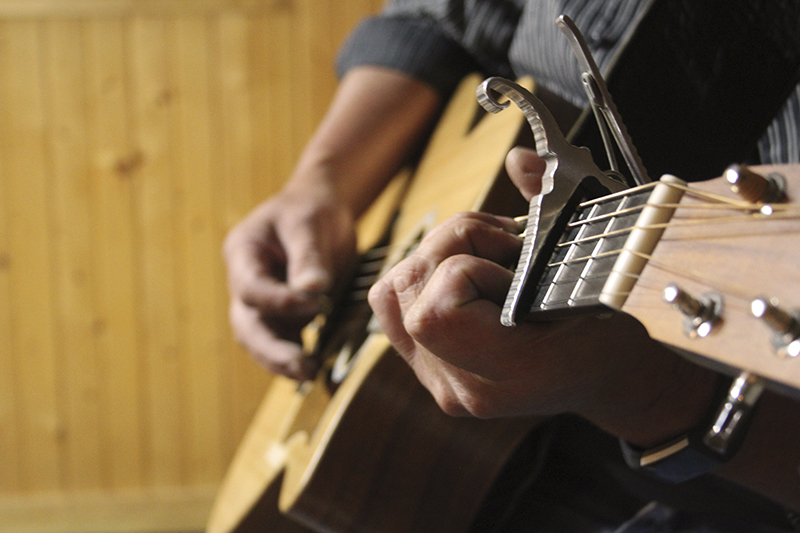 Brett Feist has been playing guitar since he was 27. When he performs, he plays covers, but he is working on a repertoire of his own music. – Sarah Kocher/Albert Lea Tribune

In Hartland, he met the men who would form the Circuit Breakers, and the men who got him on stage with a bass in his hands within a month.

Hartland is also where Feist met Gina Crumb-Monacy, who owns the Bend in the Road in Manchester. According to Crumb-Monacy, Feist was the first musician she tracked down and the first to play there after she and her husband took over. She puts effort into who she selects. Each of the performers has been musically vetted either in person or via a YouTube track-down. For Feist, it was the former: When she lived in Hartland, Crumb-Monacy would spend time with the Circuit Breakers, watched them practice and occasionally singing with them.

“(Feist) didn’t do as much of the front-manning then,” she said.

Crumb-Monacy moved away for  12 years, then moved back to the area.

Feist plays at the Bend in the Road approximately every six to eight weeks.

“He’s definitely somebody that I made sure I put on the schedule, reoccuring,” she said. “Brett brings a great crowd, and he’s just super talented, so he’s someone I definitely make room for on the calendar.”

Currently, Feist rotates through venues in various small southeast Minnesota towns, including Manchester, Easton, Wells, Walters and also Scarville in Iowa. He doesn’t play with a set list, per se, because it is “too much machinery,” but he has a list of what he knows how to play and an iPad for the stuff he hasn’t quite memorized. Even that isn’t the end of what he’ll play.

“Now, I play all of that,” Feist said. “I can’t pinpoint it down to a genre or a specific. I just play songs that I like, and I like a lot of different things. … I’ve opened a show with Waylon Jennings and finished with Metallica, and throw some ’70s pop in the middle.”

And during all of it, he likes to keep it loose and personal. As a musician, he said he always strives to be a little better than the last time.

“Every time you play out, you learn something about yourself, what other people like, what they expect of you,” Feist said. “I mean, you can’t take it for granted that people are coming out, they’re spending their hard-earned money to enjoy themselves, and you are sitting there with the ability to tick them off and make them leave or make them stay, and you can’t take them for granted, because they’re the ones that get you back in the door.”

They’re also the ones that keep the fever going.

“When there’s energy and they like you and they’re paying attention or they’re singing along, you can tell that they’re having a moment, you know?” he said. “That’s kind of electrifying, and it kind of you, you know, feeds the fire a little bit that you can’t wait to do it again.”

So he does, around three Saturdays a month with a handful of Sundays sprinkled in.

Bend in the Road