A memorial service for Wesley Paul Olson will be at 3 p.m. Thursday at Bonnerup Funeral Service in Albert Lea. The Rev. Don Larson will officiate. Visitation will take place one hour prior to the service. Inurnment will be in St. Peter Cemetery in New Richland. 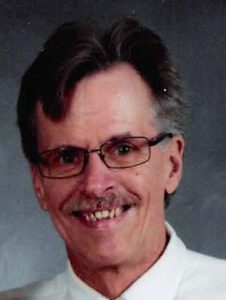 Wesley “Wes” Paul Olson was born on May 13, 1961, in Albert Lea to Robert and Regis (Johnson) Olson. He graduated from Albert Lea High School in 1980 and took classes at Riverland Community College.

For most of his life, Wes lived in Albert Lea, with time being spent in Colorado, Wisconsin and the Twin Cities. Wes had an interest in photography, and early in his career, he worked various jobs in the photo industry. Wes also worked various other jobs, most recently being a forklift operator at Minnesota Corrugated Box for the last couple years.

Wes was a NASCAR fanatic; Dale Sr. and Dale Jr. being his favorite drivers. He liked monster trucks, hotrods, riding his Harley-Davidson and enjoyed listening to all types of music. Wes was an animal lover, with Lily, his cat being a favorite. He can be described as a family-oriented person with a kind heart. Wes loved to tease, joke and always enjoyed laughing. His quick wit will never be forgotten.

He is preceded in death by many extended family members.