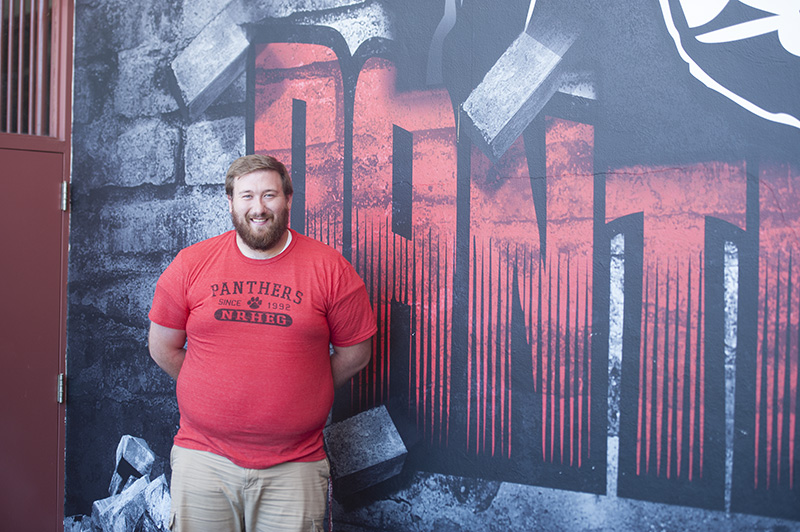 Marc Kruger was recently hired as the physical education teacher and head football coach at NRHEG High School. This will be his first head coaching job after stints at Regis Catholic School and Deer River as an assistant. Tyler Julson/Albert Lea Tribune

Kruger, a 2011 graduate of Albert Lea High School, said he was involved in many sports growing up. In high school, he participated in football, basketball and track and field. He decided to focus on football after graduating from high school, moving on to play at Wartburg College. After being sidelined by a couple of ankle injuries, Kruger decided to end his playing career and transferred to Wisconsin-Eau Claire.

Kruger coached at Regis Catholic School as an assistant for two years before moving to be an assistant coach at Deer River High School.

He talked about what it means to him to get his first head coaching job back in the area where he grew up.

“I lived in Ellendale for a bit,” Kruger said. “My mom is from and teached in Albert Lea, my grandpa used to teach in Albert Lea, I graduated from Albert Lea. It’s just really nice to be able to get back down here and come back home.”

He said his coaching style is to bring as much energy as he can, but still being able to be calm, cool and collected when it comes to game day. His favorite part about coaching football is that it takes the whole team working together to be successful. He said he knows that NRHEG football is traditionally a fairly successful program, and he doesn’t want to make any drastic changes, but he wants to keep that winning tradition alive.

“We expect to have a winning season,” he said. “We plan on winning some playoff games. The goal every year, is we go to state. I don’t know if we get there every year, but that’s going to be the goal no matter what.”

As a first year coach, Kruger knows there might be a few hurdles to clear getting to know his new team. However, he has plans set in place to combat those issues. He said the team is going to get together in the next couple weeks to just get outside and run some plays. He wants this time to be fun, like “backyard football” with everyone getting to know each other. Then, as the school year approaches, the team will hold its Panther Camp, which Kruger said will basically be just like practice.

Although he’s only been on the job for a few short weeks now, he said his favorite part so far has been all the community support. He said he clicked with the players the first time they met each other at a 7-on-7 camp, and they had a great turnout at the player-parent meeting, with 40 to 50 players showing up to get to know each other.

“I’m looking forward to the games this year,” he said. “It’s been a life goal of mine, to be head football coach. I knew when I was a little kid that I probably wasn’t going to play in the NFL. That wasn’t going to happen, but being a head coach, that could happen. Ever since second grade, I’ve had that set as my goal and asking what I could do to reach it.”