A new leader for the Vikings 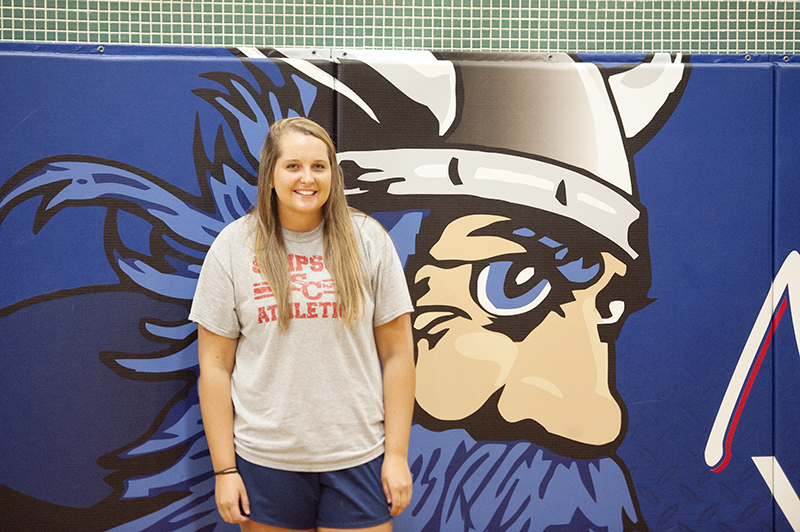 Ellen Gallagher will take on the role of head volleyball coach at Northwood-Kensett this season. Gallagher will also teach physical education — primarily at the elementary level, with a couple classes at the high school. - Tyler Julson/Albert Lea Tribune

In her first year as a teacher at Northwood-Kensett, Ellen Gallagher will also take on the role of head volleyball coach in the 2018 season.

A native of Moville, Iowa, Gallagher attended Simpson College out of high school, where she played on the basketball team for four years and attained a degree in physical education and health teaching kindergarten through 12th grade.

Almost immediately after graduating from Simpson, she moved to Northwood and was a volunteer coach for the softball team over the summer.

“It was nice to get into the community,” she said. “I got to know some of the girls and some of the different coaches and teachers around. It was a really great experience and I really enjoyed it.”

Gallagher takes over a Vikings volleyball program that finished with a 7-20 record last season. Although she hasn’t had any practice time yet, she said she has been working with some of the girls at the school’s SAQ (Speed, Agility and Quickness) and weightlifting programs. The team also participates in open gyms and will be going to a camp at Iowa Lakes Community College this week.

Based on the short amount of time she has gotten to spend with her players, Gallagher is sure she knows what the team’s strength is going to be this year.

“I think this group has a lot of energy,” Gallagher said. “Even at 7:30 in the morning at workouts, the girls show up with a ton of energy. I think that can be a strength and hopefully that can carry on to the court, so they can build strong relationships with each other.”

Because this will be her first year as head coach, Gallagher said she’s not quite sure what her coaching style is going to be yet. During her time coaching at various camps and volunteering for the softball team, she knows she won’t be doing a lot of yelling during the games. She said she wants games to run as smoothly as possible, and that means working extra hard in practices on things they need to improve.

Once school starts she will have her hands full for a while, with this being her first full-time teaching job and first head coaching experience, but Gallagher said she likes to stay busy and thinks she will adjust quickly to the schedule.

“I’m glad that I got here early this summer,” she said. “Just to get a feel for the awesome community feel around here. Coming from a small town, I knew that relationships were going to be really important to build even before I started coaching or teaching. The relationship building is huge and I look forward to continuing to develop that with my players. That’s going to be the most important thing throughout the whole season.”