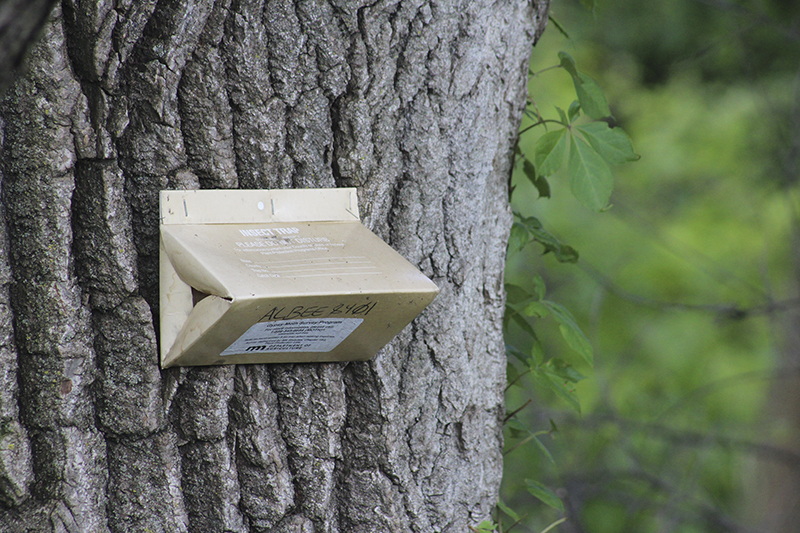 Sixty-six of this year’s approximately 23,000 traps set in Minnesota to survey for gypsy moths were set in the Albert Lea area, a representative from the Minnesota Department of Agriculture said.

The survey is intended to gauge Minnesota populations of the gypsy moth, a leaf-eating pest spreading westward across the United States from its introduction point in Massachusetts in the late 1800s. 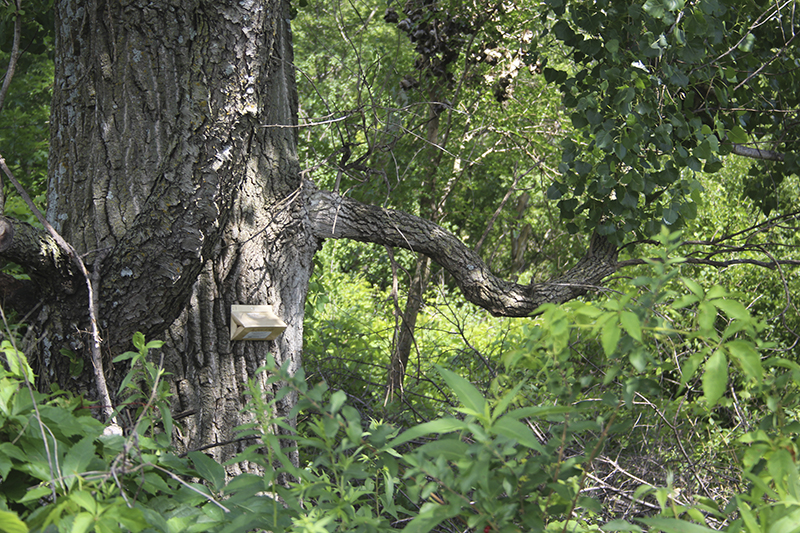 The gypsy moth trap is made of cardboard and contains a pheromone to lure in male gypsy moths. The last time Albert Lea was involved in a gyspy moth survey was in 2010. Sarah Kocher/Albert Lea Tribune

According to the Minnesota Department of Agriculture, the first signs of the gypsy moth in Minnesota appeared in Duluth in 1969. The annual trapping program began in 1973.

Allen Sommerfeld, senior communications officer for the MDA, said the actual edge of the gypsy moth infestation is in Wisconsin and northeastern Minnesota, including Cook and Lake counties.

Surveying efforts in Minnesota are largely focused on the eastern edge of the state. In addition, areas within the rest of the state rotate through from year to year.

Some criteria for survey areas includes city populations of over 10,000, as well as those with campgrounds, state parks and areas where people may inadvertently bring gypsy moths in from other parts of the state, Sommerfeld said.

“With that criteria, you know, we looked and wanted to focus the attention on where the most, you know, the bigger problems may be, and so that’s how we chose the Albert Lea area,” he said.

“Those gypsy moths have come in from somewhere else,” Sommerfeld said. “They have not flown on their own from that western edge (of Wisconsin). It’s just too far away. So, we really encourage people not to move firewood around from other parts of the state.”

According to a Minnesota Department of Natural Resources press release, 2018 started with new firewood rules because quarantine boundaries instituted for the gypsy moth and emerald ash borer “made the former rules problematic.”

These firewood rules apply to DNR-managed lands and include specifications for where the firewood was purchased and where it will be burned.

Sommerfeld said people can also inadvertently move gypsy moths on camping equipment as well. The MDA recommends a spot-check of all your equipment before you leave an area.

“We really need the public to be vigilant in order to kind of slow this march across the United States and into Minnesota,” he said.

Survey maps produced by the MDA show a general decline in moth numbers trapped over the last several years. Sommerfeld said there are a few reasons for that. One would be the weather: Several years ago, a polar vortex meant cold winter conditions killed off a number of moths. The second could have to do with trap locations: After 2014, when Lake and Cook counties were quarantined, the MDA adjusted the trapping grid to include fewer traps in those counties, which may also factor into the numbers.

But some of those lower numbers have to do with the nationwide Slow the Spread program, a federally-funded program intended to do its namesake justice: to slow the spread of gypsy moths. Sommerfeld said that at this time, all the funding for gypsy moth treatments comes from either the federal government or its Slow the Spread program. The program involves cooperation between states and the United States Department of Agriculture Forest Service.

Sommerfeld said the gypsy moth feeds on over 300 different types of trees and shrubs, including oak, poplar and birch.

“They are very voracious eaters,” he said, and in addition, as a non-native species, it has no known other insects or mammals to keep it in check. While the gypsy moth doesn’t kill the tree, as the ash borer does, it makes the tree more susceptible to drought and diseases, which become the real killers.

In addition, the moths are a nuisance factor, Sommerfeld said: The hairs they shed can cause problems for those with asthma, and when large populations feed, it may seem like it’s raining bits of leaves and moth excrement.

“It will eventually get here, but we want to keep it at bay as long as possible,” Sommerfeld said. “Because of our ecosystem that we have in Minnesota, there are a lot of tree species that gypsy moths really love, and I — we — feel that there would be a huge problem and we’d have these economic impacts like tourism issues, and closing the parks and things that other states have seen, and killing trees, and we want to keep that at bay as long as possible.”