Services for Day Ngoc Pham, 72, will be at 10:30 a.m. Saturday at Bonnerup Funeral Service in Albert Lea with visitation from 8:30 to 10:30 a.m. at the funeral home. Interment will follow at St. Theodore Cemetery. 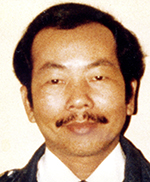 In 1975 he received a sponsorship and came to the United States, living in Nevada. He moved to Albert Lea in 1977, where he worked at Wilson & Co. and later for Hormel in Austin, from which he retired.

He married Zita Smith in Owatonna; they were later divorced.

He enjoyed fishing and watching TV.

Day is survived by his sons Dason and Daniel Pham of Albert Lea; grandchildren Kane, Li, Dason Jr., Clarence and Damien; his brothers Chanh (Dung) Pham of San Jose, California, and Ngung (Lien) Pham of Canada; several and nephews; and lots of family in Vietnam.

Day was preceded in death by his parents.