Funeral services for Edna L. Bronner of Cresco, Iowa, will be at 11 a.m. Friday at Notre Dame Catholic Church in Cresco. The Rev. Dennis Cain will officiate. Visitation will be from 9 a.m. until the time of service at the church. Interment will be at 3:30 p.m. Friday in St. Theodore Catholic Cemetery in Albert Lea. 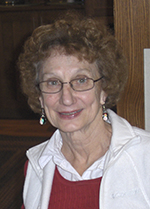 Edna was born Dec. 18, 1936, in Fort Atkinson, Iowa, the daughter of Edward and Vera (Kuhn) Blong. She was a graduate of Notre Dame High School in Cresco.

On Sept. 4, 1956, she was united in marriage to Charles M. Bronner at St. Joseph’s Church in Cresco. Edna lived most of her life in Cresco and the past seven years in Albert Lea.

She was an active member of the Notre Dame Church with the altar guild and church women. She had been employed for many years as bakery manager for several bakeries and she had many happy memories from her last job at Hoines Drug in Cresco. In her free time she enjoyed her cat, Gracie; snowmobiling, quilting, ceramics, playing Rummikub and bingo, and collecting cardinals. One of her joys in life was spending time with her grandchildren.

She was preceded in death by her husband, Charles; her parents; brother, Gerald Blong; grandsons Scott Kach, Eric Bronner and Benjamin Lepa; nephew, Jeff Lind; and numerous brothers- and sisters-in-law.

A celebration of life for Jim Smith “Coach Smith” of Glenville will be at 10:30 a.m. Saturday at United Methodist... read more