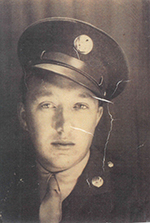 He was born Jan. 24, 1919, in Lucan, the son of Emil Sr. and Emma (Smetak) Prantner. The family moved to the Seaforth area, where Emil’s parents farmed and he attended school. Upon his mother’s death, when Emil was 10 years old, his father moved the family to the Myrtle area to be near relatives. Emil helped on the farm and completed school through the eighth grade. At age 21, he enlisted in the U.S. Army and served for four years and seven months during World War II in Normandy and the Battle of the Bulge. Emil received several medals, including the Bronze Star. On July 3, 2002, Congressman Gil Gutknecht awarded him the Liberty Medal from Normandy.

On Oct. 10, 1945, Emil was united in marriage to Beverly Hartley of Austin and the couple had two children. Emil and Beverly lived on the same farm for 71 years. He loved the land, enjoyed hunting and fishing, and was good at woodworking — making many things for members of his family.

Emil was an active member of Trondhjem Lutheran Church and a longtime member of Brick Hall. He will be dearly missed by his family and friends.

Emil is survived by his wife of 72 years, Beverly Prantner, of Austin; his daughter, Marsha (Steve) Wilcox, of Livermore, Colorado; five grandchildren and 12 great-grandchildren; and nieces, nephews, other relatives and friends.

He was preceded in death by his parents; his son, Dean Prantner; four brothers; and two sisters.

In lieu of flowers, memorials can be directed to Trondhjem Lutheran Church, Brick Hall or a recipient of donor’s choice.

Worlein Funeral Home of Austin is assisting the family with arrangements. Condolences may be expressed to the family online at www.worlein.com.