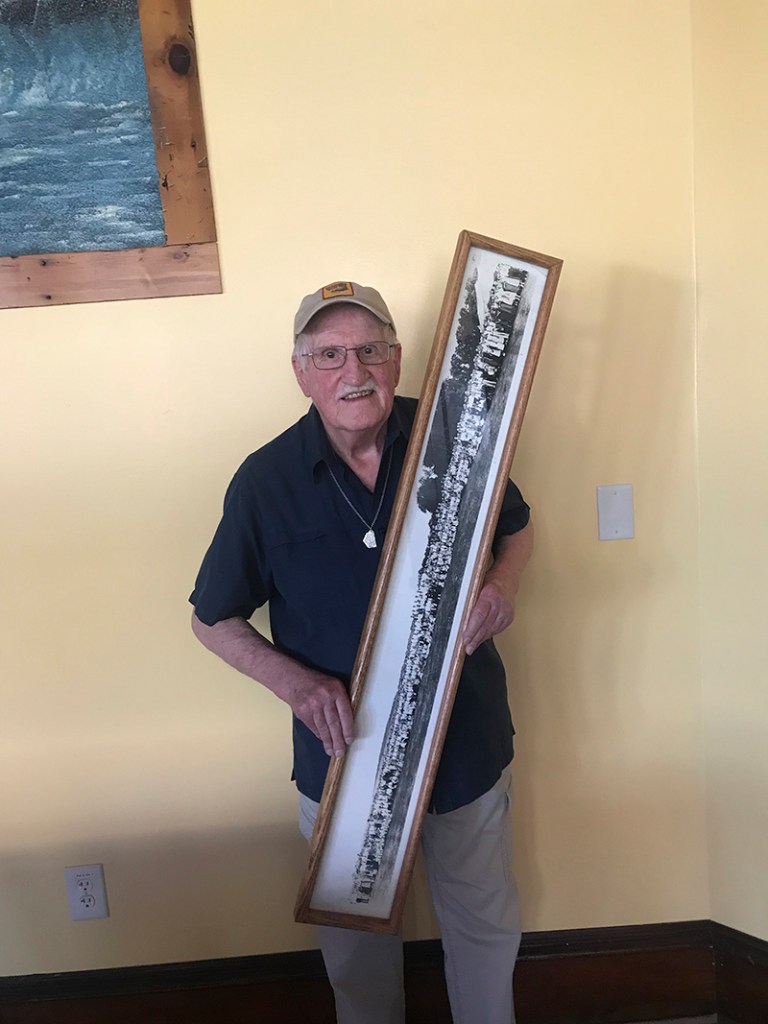 Rodney Hatle poses with his copy of a 1936 photograph featuring over 500 people who were party of the nonexistent community of Vista. - Kelly Wassenberg/Albert Lea Tribune

NEW RICHLAND — With every final breath, a little piece of history is lost. The memories of those who pass take with them their memories and knowledge of the experiences they had and the people they knew.

This inevitable truth has launched an effort to identify approximately 530 individuals pictured in a 1936 photograph — which spans 3 1/2-feet-long and is only 4 1/2 inches tall — before that knowledge is lost with the sands of time.

The photograph has a unique origin. It was taken during an anniversary event for a community that never was.

The churches, located outside of New Richland, split in 1877 to form the Vista Lutheran Church and Vista Evangelical Covenant Church.

Hatle said the Covenant Church was the stricter of the two.

“They were influenced by the new immigrants that came over from Sweden,” he said.

“They didn’t get along very well socially because of the religious stuff.”

Seventy years after the formation of the church, Vista Lutheran Church parishioner Herman Peterson decided to bring the congregations back together for a reunion in 1926.

The reunion became a tradition, which was commemorated with the 1936 photograph in question.

Hatle, who has been working on the project with fellow New Richland High School graduates Harriet Eaton and Ronald Johnson, said the information gathered on the photo has been formatted into a book which will be for sale during Farm and City Days this weekend. Proceeds from the book will benefit the New Richland Area Historical Society and hopefully lead to the identification of others shown in the photo.

The book, “Vista 1936: Picture of a Community,” includes blown up images from the photo, which was originally taken by New Richland photographer Bill Steihl.

Hatle theorizes Steihl was able to create the unusually long photograph by splicing together several photographs taken of the large group. His suspicion is supported by evidence as all the subjects are facing the camera, lines where the splicing was done can be seen in the blown up copies of the image and one man appears in the photo twice. Hatle speculates the man posed for one of the first photos and then ran further down the line ahead of the photographer.

Those who purchase the book will be able to view the blown up images and the names of those identifies thus far.

The book also contains a three page color map of land ownership in the late 1800s and biographical information of those who have been identified in the photo. There are also other pictures and illustrations regarding the history of the area.