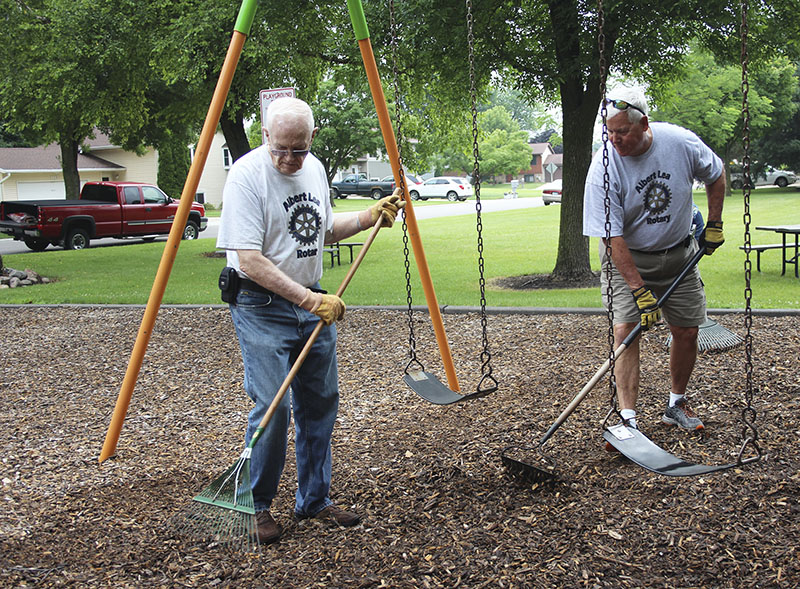 Bill Groskurth and Don Nolander redistribute the woodchips under the swings for a photo at Eastgate Park in a second round of raking Saturday. Sarah Kocher/Albert Lea Tribune

Rotary Club keeps up park in memory of late member

The Rotary Club of Albert Lea on Saturday honored the contributions a longtime member made — both to the club and the community.

Albert Lea Rotarians adopted the park and assembled it in 2005. Jacobsen volunteered the organization to take care of Eastgate Park as part of the city’s Adopt a Park program. Rotarians have helped clean up the park by filling in holes and cleaning up trash every second Saturday from spring to fall. 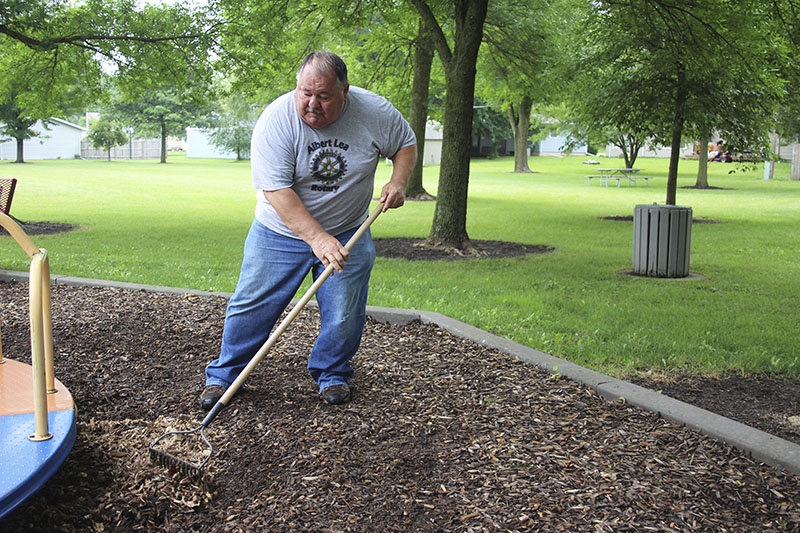 John Forman helps the Rotary Club give another once-over to the playground Saturday morning for a photo. The group started helping maintain Eastgate Park when Earl Jacobsen volunteered them through the city’s Adopt a Park program. Sarah Kocher/Albert Lea Tribune

Swenson said the organization was “following through in (Jacobsen’s) honor” by cleaning the park.

Swenson and Jacobsen both began their stints as Rotarians in the mid-1970s.

Jacobsen was a key member of the organization’s Social Committee and led the Rotary’s annual steak supper and corn and brat family picnics.

A former teacher at Albert Lea High School, Jacobsen served during World War II as a tank commander in France and Germany.

He was extensively involved in Albert Lea, including as a Realtor at Dress Realty, where he helped Albert Lea Audubon Society secure its current space. He volunteered for the food pantry, Habitat for Humanity, Salvation Army and Meals on the Go. He was an ambassador for Courage Center for the United Way and a guardian ad litem for Freeborn County District Court.

Jacobsen was a staff member at Camp Courage, a camp run by the Minnesota Society for Crippled Children and Adults, from 1966 to 1972.

Jacobsen was named an outstanding graduate by the Albert Lea Alumni Association.

Albert Lea resident Donald Petran, 91, said he knew Jacobsen since he was in junior high school. The pair were in the same Boy Scouts troop.

After graduating from Albert Lea High School in 1945, Petran was drafted into the Army in 1946, where he served until March 1947.

Petran moved back to Albert Lea in 1952 to help his father with their commercial vegetable farm in the Hayward area. Petran and Jacobsen were neighbors on Lakeview Boulevard from about 1960 to 1980.

Boys in both families were Boy Scouts, and Donald Petran and Jacobsen served as Rotarians and on an investment club at the same time.

“He was a dedicated Rotarian,” Petran said. “He believed in service and helping others.”

Jacobsen played football, hockey and track at Albert Lea Area Schools where he graduated in 1942.

After studying at Albert Lea Junior College as a pre-engineering student, Jacobsen joined the U.S. Army from 1943 until he was discharged in 1946. An engineer in basic training, he was part of the 12th Armored Division in Europe during the war.

“He never talked about the action he saw, but given the time he was in — his birthday is in October, mine is in January,” Swenson, 73, said. “When my birthday occurred in January, I would then be exactly 20 years younger than Jake. And I always gave him a rough time. I’d say, when I was born in January 1945, Jake was running around Europe in a government-issued all-terrain vehicle.”

Jacobsen taught one year in Benton Harbor, Michigan, before his family moved back to Albert Lea, where he worked as a vocational teacher from 1951 to 1986 at Albert Lea High School. Vocational students were reportedly winners at Minnesota state competitions for 17 years, and two Albert Lea students took first place in national competitions.

Jacobsen transferred to the University of Minnesota after his service, where he obtained his master’s degree in education in 1957.

“If Jake said he’d do something, he do it,” Swenson said. “Totally honest.”