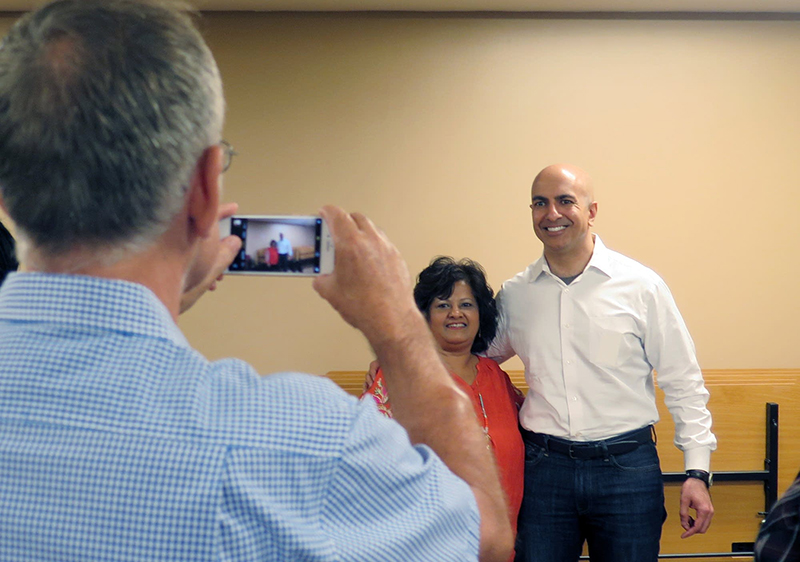 Federal Reserve Bank of Minneapolis President Neel Kashkari poses for a photo during a visit to Worthington in southwest Minnesota on Friday. - Mark Steil/MPR News

During a time when immigrants are often under fire, the president of the Federal Reserve Bank of Minneapolis had some nice things to say about them this week. During a two day visit to Worthington, Neel Kashkari said immigrants are helping that southwest Minnesota city grow, something many communities in rural parts of the state can only hope for.

“Immigration is playing such a big role, so that the population is increasing and they’re filling a lot of really important jobs,” said Kashkari. “They can drive the economy.”

Many of those jobs are at a meatpacking plant that dominates the east side of town, and employs more than 2,000 people.

Others are at some of the city’s new immigrant-owned stores and companies.

Kashkari met with some immigrant business owners during his visit to find out what sorts of problems they faced. For the owner of an Afro-Carribbean food store in Worthington, one of the biggest obstacles for immigrants thinking about starting a business is working up the courage to take that first step. 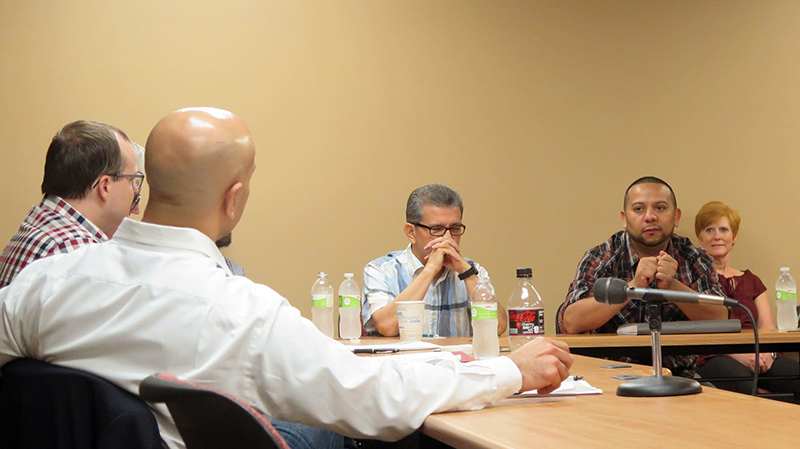 Federal Reserve Bank of Minneapolis President Neel Kashkari listens to an immigrant business owner in Worthington on Friday during a two-day visit there. – Mark Steil/MPR News

Nkashama said one thing that helped her conquer that fear was making contact with a business development group in Worthington that steered her through start-up pitfalls.

Some owners complained about local banks and their lending practices, things like equity requirements and downpayments.

Kashkari said part of the Federal Reserve’s responsibility is to make sure its member banks are not discriminating on the basis of race. But he didn’t find any evidence of that discrimination in Worthington.

“It doesn’t sound like there are additional barriers because you’re an immigrant,” said Kashkari. “All the barriers you all are talking about are true for everybody.”

Communication is often a problem for the owner of a cell phone business.

“Worthington has become a place for people from a lot of different places,” said Miguel Rivas. “It is good, but then it is also hard.”

Born in El Salvador, Rivas told Kashkari that the mix of diverse ethnic groups that has boosted the city’s economy can also make business difficult. By one estimate, more than 40 languages and dialects are spoken in the city. Rivas says that can make it difficult to close a business deal. It can also make it difficult to find workers who can communicate in more than one language.

The language barriers can be difficult, but they haven’t slowed immigrant businesses owners. A local banker estimated they own more than a quarter of the businesses operating in the community.