A celebration of life for Jim Smith “Coach Smith” of Glenville will be at 10:30 a.m. Saturday at United Methodist Church in Albert Lea. The Rev. John Mitchem will officiate. Honors will be accorded by Glenville Fire Department. Visitation will be from 4 to 7 p.m. Friday at United Methodist Church in Albert Lea and one hour before services at the church. Bonnerup Funeral Service is assisting the family. 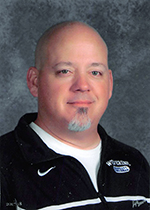 Jim left unexpectedly at University of Minnesota Hospital in Minneapolis on Monday, July 2, 2018.

He was 46. He was born James Arthur on Aug. 27, 1971, in St. Paul, with his loving parents Arthur W. and Jaris L (Kelly) Smith making his home in Albert Lea. In his younger years he played football, played tuba in band and was active in Cub Scouts, Boy Scouts and 4-H. He graduated with the Albert Lea High School class of 1990. He graduated from Waldorf College in Forest City and from Southwest State in Marshall.

Jim had worked at the Albert Lea Family Y and was working in the special education department in Glenville Schools and as a groundskeeper at Wedgewood Cove. Jim’s real passion was working with youth. Coach Smith had coached for more than 20 years in Albert Lea, Austin and Glenville. He coached football, softball, baseball and offered to help in any way he could. A sports enthusiast, he loved fishing with his dad, a good game of golf, as well as participating in any sport that needed a player. He was also an avid spectator of all sports, including professional and any at the local level.

His compassion to help others showed in his lifelong membership and participation in all aspects of the United Methodist Church community. He was a proud and dedicated member of Glenville Fire Department since 2013.

He was preceded in death by his mother, Jaris L. Smith; grandparents Arthur W. and Veona A. Smith and James A. and Doris E. Kelly; and grandfather-in-law, Dale Mangskau.

“Jim put a mark on all of our hearts,” his family said. “He was a very caring, loving, dedicated husband, father, son and friend and volunteer.”