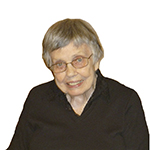 A memorial service will be at 2 p.m. July 14 at Sliver Lake Lutheran Church, 705 Silver Lake Road in Northwood, with the Rev. Randy Baldwin officiating. Family will greet friends and relatives from 1 to 2 p.m. before the service. Per Konnie’s wishes, her body was cremated and inurnment will take place in Silver Lake Cemetery following the service. The family suggests memorials go to the Silver Lake Lutheran Church cemetery fund or donor’s choice. Mittelstadt Funeral Home, 902 E. Main St. in Lake Mills, is in charge of arrangements.

Konnie was born July 10, 1924, in Postville, Iowa, the only child of Charles and Minnie (Odegaard) Bakken.  Shortly after, they moved to Silver Lake. She was baptized and confirmed at Silver Lake Lutheran Church. She attended Silver Lake country school, then moved to Emmons to attend high school and graduated in 1942.

Konnie married Arthur Haas on March 14, 1942, in Emmons. Arthur was in the U.S. Navy during the war.  She moved to his base in Charleston, South Carolina.  After the war was over they moved to Grandforks, North Dakota. They lived there two years before moving back to Emmons. Konnie lived in Emmons in the same house for almost 60 years before moving to Albert Lea.

Konnie was a Cub Scouts leader, and a Brownies and Girl Scouts leader. She taught Sunday school. She worked for the USDA at Wilson & Co. in Albert Lea during World War II. She also worked at Walker-Deluxe-Fleetguard-Cummins Manufacturing in Lake Mills as a production line foreman and retired in 1983. She always said she liked the idea she was retired longer than she worked.

Konnie was interested in antiques and would often be seen at many of the auctions in the area. She also was very active with genealogy. She was the go-to person not only for her family history but many other local families as well.  She was a fifth-generation Norwegian-American. Her first language was Norwegian, but she had to learn English in school as speaking Norwegian in school in Iowa was illegal at that time (a result of World War I). She was one of the few still left who knew almost all of the children of those early immigrants who came from Norway in the 1860s. After her retirement she was very excited to have been able to visit Norway. She also was extremely proud of being a part of a language study by the University of Oslo. She was videoed by two professors from the University of Oslo for their archives. They said listening to her speak Norwegian was like listening to a history book because her dialect was so old.

She was preceded in death by husband, Arthur Haas, in 1987.