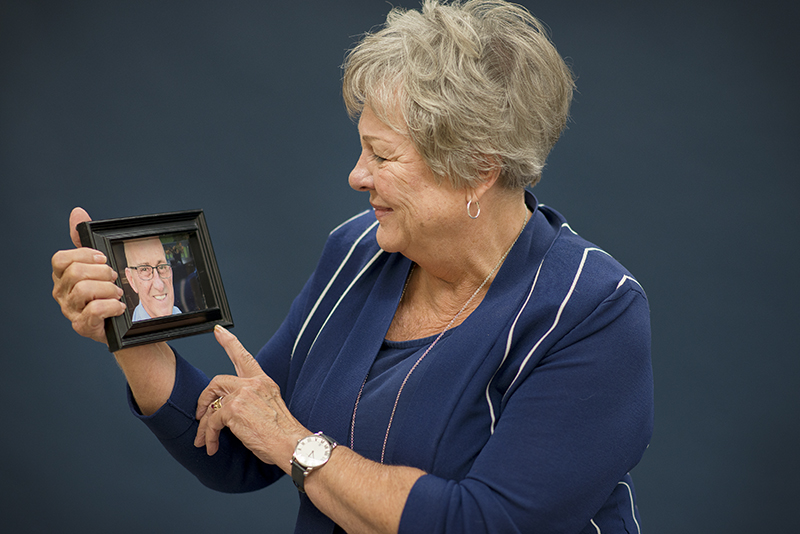 Ellen Kehr holds her favorite photo of her husband, Randy Kehr, who passed away in November. The upcoming Story Show will be dedicated in his memory. - Colleen Harrison/Albert Lea Tribune

Less than eight months later, the community is giving back to the longtime community advocate by sharing stories of people inspired by people like Kehr.

The Story Show, expected to last about two hours, will feature stories from nine local storytellers — Jerry Gabrielatos, Ava Corey-Gruenes, Nate Peterson, Alexa Drescher, Luz Ruiz, Solveig Lange, Lindsay Kramer, Holly Karsjens and Shane Koepke — about how they or someone they know has “let their light shine,” according to an event preview. Aaron and Ariel Winter will perform a musical interlude during the show.

The event, in Kehr’s memory, will benefit efforts to update downtown Christmas lights and decorations, efforts that Kehr championed himself over two decades ago. Seven previous Story Shows have reportedly raised more than $6,000 for local charities.

Randy Kehr’s wife, Ellen Kehr, said her husband “would really be so touched that they dedicated that to him.”

“This is a way that even though he’s gone, he’s still being included in the community, and that would mean so much to him,” she said.

The couple attended the first Story Show together, and Randy Kehr presented at the show a couple years later.

Ellen Kehr said her husband was more than a community leader.

“I see him more as a community steward,” she said. “I think that’s how our leadership team sees him. Randy became a community leader second — first he was a volunteer.

“He led by example.”

Worth, a Story Show producer, spoke of the inspiration Kehr gave to him.

“Everybody in their life will have a hall of fame of people who inspire, and he was, without question, that person for me,” he said.

He said Kehr’s commitment to the community went beyond his job.

“If you were at an event, there was a very good chance you would see Randy Kehr at that event,” Worth said.

He said without Kehr, The Story Show would likely not exist because Kehr motivated Worth to attend a local leadership course, which motivated him to then launch the event.

Worth said Kehr “always seemed to be the best version of himself, especially in community mode.”

Worth’s favorite part of the show is the display of local talent.

“I’m always really moved by how many talented storytellers there are in our community, but what I’m really starting to realize … is that everybody has a story to tell, everybody,” he said. 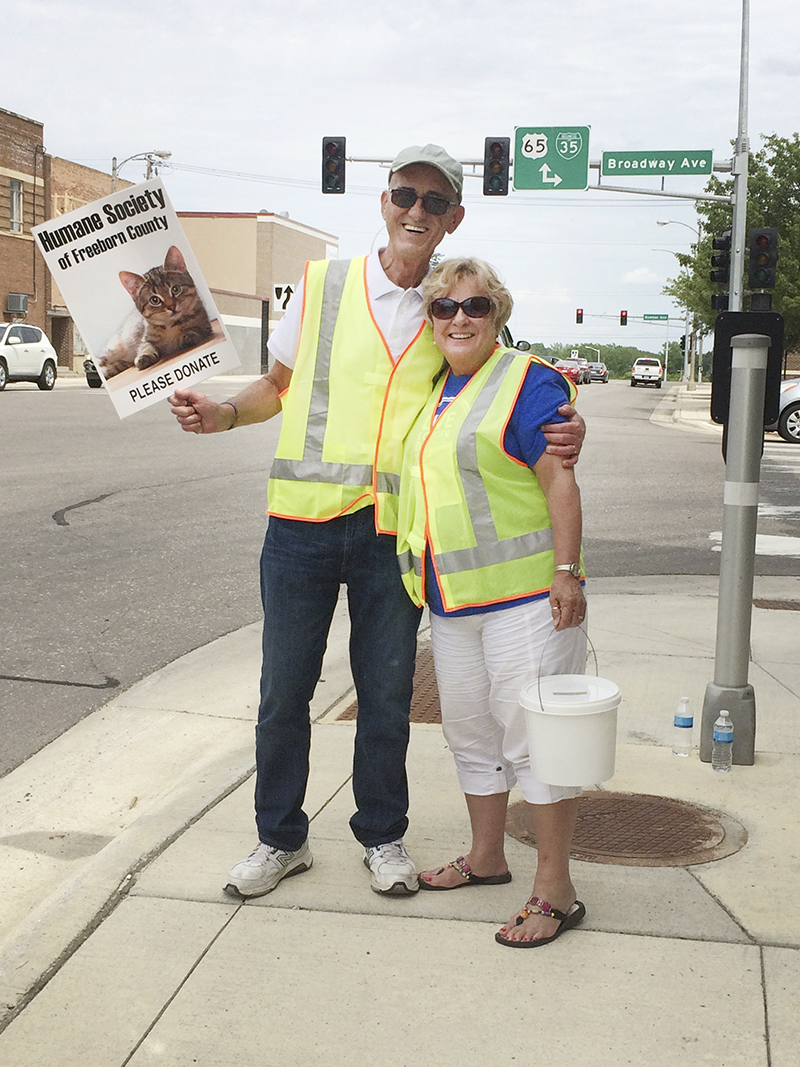 Randy and Ellen Kehr pose for a picture in June 2017 while fundraising for the Humane Society of Freeborn County. “It’s the last fundraiser Randy and I did together,” Ellen Kehr said. “This is what I
miss the most … the hug, the smile and the ‘we are a team.'” – Provided

Ellen Kehr said her concern about whether or not her husband, a Twin Cities native, would like living in a small town were quashed after the couple moved to Albert Lea — Ellen Kehr’s hometown — in 1996.

“Very quickly, what I realized, is Randy didn’t just move to Albert Lea, he chose to live in Albert Lea, to make Albert Lea his community of choice,” she said.

Soon after the couple moved to the area, Randy Kehr joined the Lions Club, and the pair participated in flight breakfast and bingo booths. Randy Kehr led efforts to clean up local lakes, the downtown district and other initiatives.

One of the first campaigns Randy Kehr was involved in was installing Christmas lights downtown in the late ’90s, and he was soon awarded the Volunteer of the Year Award. The award was the inspiration behind Ellen Kehr’s request that Story Show proceeds go toward downtown Christmas lights.

Randy Kehr was the first mentor of the STARS mentoring program and chairman of Albert Lea’s sesquicentennial celebration party at Skyline Plaza, an event that 500 people attended. The couple have also led past United Way campaigns.

“Randy was such a good organizer of stuff like that, and he had the background to do it,” Ellen Kehr said.

She said her husband’s listening skills in public were mirrored at home, and said he made friends wherever he went in Albert Lea.

“He really would listen,” Ellen Kehr said. “He was adaptable. What I liked the best about him was that he wasn’t me.”

She said the couple’s dynamics complimented each other.

“He helped me be a better person than I would have been without him,” Ellen Kehr said. “And hopefully I did the same for him. We really complimented each other.”

Ellen Kehr said though her husband is no longer living, he is still leaving messages for people.

“Where he is … he can see it all,” she said. “He can see the bright lights that we haven’t even noticed yet, because they’re out there, everywhere. It’s just, they have to shine a little brighter for people that are still here to see them, but he sees all of those bright lights.

Kehr’s first battle with cancer began when he was 38, and his wife said that experience taught him life lessons.

“He understood what it takes to live with that in a positive way, and that you can’t let that control your life, so when he would see someone with a challenge, he would always be there to do whatever he could,” she said. “But he also understood that there were people with challenges that he couldn’t see, so he always assumed that you had a challenge.

“He might not know what it is, but he always assumed that each person had a challenge. It may be obvious, it might not be obvious, but everybody’s got something. It’s how we respond to the something that makes a difference in our lives and the lives of the community.”