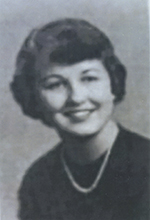 Lorraine was a loving and beloved woman. She was born March 17, 1934, in Shelly to Earl and Clara (Mjolsness) Schaeffer. She had three sisters and one brother. Lorraine would tell her children many stories over the years about life and work when they lived on the farm. She particularly had fond memories of working in the outdoors, helping in the fields.

She graduated from Albert Lea High School in 1952, and then went on to comptometer school.

In 1954, she was married to the love of her life, Edward R. Holleschau. They were married for 33 years until Ed passed away in 1988. They lived on both coasts and several places in between during their marriage due to Ed’s career advancement with AT&T. When they lived in California, they bought two Baskin-Robbins stores and Lorraine managed the stores.

Lorraine and Ed had four children. They both made family and faith in Christ Jesus a priority in life, and then enjoyed life to the fullest. Many noticed and commented how much they loved each other and remained like high school sweethearts throughout their entire marriage — holding hands, smiling and laughing.

In their spare time they both loved boating on their 26-foot cabin cruiser up and down the Bay Area Delta and beautiful regional lakes, traveling and camping in the United States, Canada and Mexico and traveling to exotic locations like Greece, Egypt, Israel and other European and Mediterranean areas.

Lorraine also married again and enjoyed other travels in later years to places like Norway and Alaska. Her second husband, Doyle Haley, also passed a few years before her.

While Lorraine enjoyed and participated in many church and community activities, she particularly enjoyed artistic pursuits. She painted with oils on canvas, wrote poetry and really enjoyed singing and dancing — especially dancing. She was a lovely and amazingly strong woman, and will be dearly missed.

She will be laid to rest at Oakmont Memorial Cemetery in Lafayette, California, next to her soulmate, Ed.