A Walters man who reportedly threatened a man with a hammer Monday was charged with two felonies on Tuesday in Freeborn County District Court.

Brian George Boettcher, 63, is charged with second-degree assault with a dangerous weapon and terroristic threats. 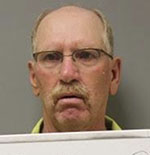 Boettcher allegedly drove a Chevrolet ahead of the employee on the fog line of the road and stopped.

Court documents state Boettcher stood in the middle of the road on his cellphone, blocking the alleged victim’s route.

After the employee took a picture of Boettcher, turned off his lawnmower and exited it, Boettcher reportedly pulled out a claw hammer from the back of his van and approached him.

“(Boettcher) appeared enraged, and as he approached (the) victim, he swung the hammer as to strike the front of the tractor (the) victim was in,” court documents state.

He allegedly then climbed up the steps of the tractor leading to the employee, hovering over him and pulling down the tractor door, yelling at him after becoming angry that the alleged victim was mowing grass on the road.

“At one point, (the) victim told (Boettcher) that what he was doing was an assault, and (Boettcher) stated he did not care and accused (the) victim of assaulting him by mowing wire up into the road,” court documents state.

Boettcher allegedly made an overhead swinging motion with the hammer while threatening the employee. He reportedly left before officers arrived but was arrested during a traffic stop.

Court documents state Boettcher admitted stopping and confronting the employee and having a hammer in his hand before being arrested.

Assistant Freeborn County Attorney Abigail Lambert argued conditional bail be set at $10,000, noting Boettcher recently stopped taking his medication, has been kicked out of local bars and has gotten into a confrontation with local firefighters at the scene of a crash.

Boettcher’s next court appearance is scheduled for July 26.