A man already in prison in a separate file was sentenced to one year and one day in prison Thursday in Freeborn County District Court for a high-speed chase. 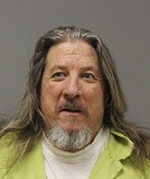 James Edward Mills, 56, was sentenced after he pleaded guilty in April to fleeing a peace officer in a motor vehicle. He was given credit for 158 days served.

Court documents state Mills was charged after a Freeborn County Sheriff’s Office deputy was on patrol July 27, 2016, at about 4:30 p.m. when he received a call regarding a driver of a white Ford Escort on the south side of Albert Lea. The reporting person reportedly followed the white station wagon, which was driving “all over the road,” striking and driving on a curb, according to court documents.

After the deputy accelerated, the Escort reportedly began driving on both sides of U.S. Highway 69, sometimes braking hard and nearly striking other motorists.

Court documents state the vehicle turned into a farm driveway.

The vehicle was later found under heavy vegetation.

A K-9 found Mills about 10 minutes later, laying in a soybean field on the west side of a tree line.

Mills was charged with driving after revocation, but that count was dismissed.

In a separate file, Mills was sentenced to one year and one day in prison April 9 in Freeborn County for a probation violation in a fifth-degree methamphetamine possession file.

The sentences will run concurrently.