Mary Kay Johnson, 71, of Cook passed away peacefully Saturday, July 21, 2018, at Carefree Living Center in Cook. Her husband and her friends were by her side. 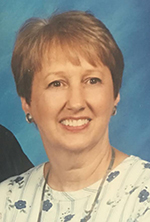 Mary Kay was born Jan. 22, 1947, to Robert and Florabelle (Peterson) Hanson in Albert Lea. She grew up and graduated from Albert Lea High School, where she started dating her future husband, Michael Paul Johnson, in the fall of her sophomore year. Mary Kay and Michael were married Feb. 19, 1966, and remained loving to one another for over 52 years until the time of her passing.

Mary Kay attended Austin Community College and eventually graduated from the University of Phoenix at the top of her class as a critical care registered nurse. She was a nurse at Naeve Hospital in Albert Lea for a short time until her family moved to Arizona in 1986. She then became a nurse at Casa Grande Regional Medical Center, eventually retiring from there in 2008 as the hospital’s employee health and infection control nurse.

Mary Kay was very active and faithful to the Catholic church. She and Michael hosted and prepared fish frys to raise money for the church and the local Catholic school while in Casa Grande, Arizona. Mary Kay and Michael continued their love of giving by cooking hundreds of pounds of barbecue rib dinners to benefit St. Mary’s Catholic Church in Cook. Mary Kay’s home was always open to God, sunshine and friends.

Mary Kay was preceded in death by her parents Robert and Florabelle Hanson; her in-laws Herbert and Marguerite Johnson; and a brother-in-law, Thomas Johnson.

A Catholic prayer vigil and visitation will be from 6 to 8 p.m.  Thursday at St. Mary’s Catholic Church in Cook. The prayer vigil will be at 7 p.m. A Mass of Christian burial will be at 11 a.m. Tuesday at St. Theodore Catholic Church in Albert Lea. Visitation will be one hour prior to the service at the church. Interment will be in Graceland Cemetery in Albert Lea. To leave an online condolence, visit www.mlakerfuneralhome.com or www.bayviewfuneral.com.