A memorial service for Mary Lou Spurr Faldet will be at 11 a.m. Friday at First Lutheran Church in Ellendale. The Rev. Richard Sliper will officiate. Visitation will take place one hour prior to the service, and burial will be in the First Lutheran Cemetery near Ellendale. 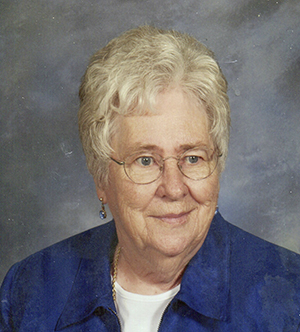 Mary Lou (Larson) was born on March 26, 1927, in Jackson City, Wisconsin, to Lawrence and Emma (Erickson) Larson. She grew up in York, Wisconsin, and went to school in Hixton, Wisconsin. After high school, she set off to help with the war efforts. She was working at Camp McCoy when she met Marlowe Spurr. The two married on June 26, 1946, in Pigeon Falls, Wisconsin. They moved to the Ellendale area and spent 46 years together until Marlowe’s death. In 2001, she rekindled her relationship with her high school sweetheart, Bailen. On Aug. 27, 2003, Mary Lou married Bailen Faldet in Wisconsin and was married until his premature death.

While spending over 50 years in the Ellendale area, Mary Lou took care of her family and farmhouse. She also worked at a number of places such as Standard Cafe, Texaco Truck Stop, Ellendale Cafe all of Ellendale and Quirim’s Bakery in New Richland.

She was a member of First Lutheran Church and also the United Methodist Church in Ellendale. Mary Lou was a 4-H leader and was on various circles in church. For fun, you could always find Mary Lou playing cards in different card clubs or with friends and family. She was known for her cooking and baking abilities.

Mary Lou enjoyed spending time watching her children and grandchildren’s sporting events. Mary Lou always had a great sense of humor and she loved time spent with her family.

In lieu of flowers, donations are preferred to the Ellendale, Geneva or New Richland Ambulance Services.