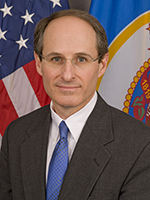 “It’s a terrible decision for the people of Albert Lea,” he said Friday during a visit to the Tribune. “It severely impacts them in terms of their access to inpatient care, and I was opposed to and have been opposed to having that happen.”

Rothman, former Minnesota commerce secretary, said a community of Albert Lea’s size “should have inpatient provider services in some fashion.”

The hospital system’s decision to transition most inpatient services, announced in June 2017, was met with contention in Albert Lea. Mayo Clinic has stated the move was precipitated by a shortage of health care workers that puts patients at risk.

Rothman said he has experience in helping increase health care competition, noting he worked to bring in a second provider to the state in 2013.

“It’s something that has to be focused on,” he said of the transition. “I personally believe that out of the profits that Mayo has, there’s sufficient funds to help Albert Lea with the inpatient services, and if there’s another way, I’d be dedicated and committed to making that happen.”

Rothman did not commit to helping stop the transition of most inpatient services to Austin if he were elected but said he would work to find solutions within the law and with communities in situations like the transition.

“I would be strongly committed, whenever these issues come up, to finding either a solution in the law or to find a way to work with the community or the providers,” he said.

Rothman, appointed by Gov. Mark Dayton as commissioner for the Department of Commerce in January 2011, resigned from the position last November to focus on running for attorney general.

He said as commissioner he collaborated with AARP, the Better Business Bureau and law enforcement to crack down on financial exploitation and abuse of senior citizens.

“Senior citizens in Minnesota are the subject of financial exploitation day in and day out,” Rothman said.

He committed to take action against the opioid industry as attorney general for what he said are “their deceptive practices, creating the harm and impact on our communities.” He expressed support for collaborating with health care systems to prevent prescription abuse among the elderly and plans to create a statewide task force on the opioid crisis.

“I will take action on the high cost of pharmaceutical drugs,” he said.

Rothman said he has been a lawyer for 30 years, believes in public service and decided to run for the position after Attorney General Lori Swanson announced her gubernatorial run.

He said his experience as a lawyer in trial and appellate courts, including filing a briefing in U.S. Supreme Court, qualifies him for the position.

He said he has publicly opposed stances taken by President Donald Trump and his administration on immigration, health care and energy subsidies.