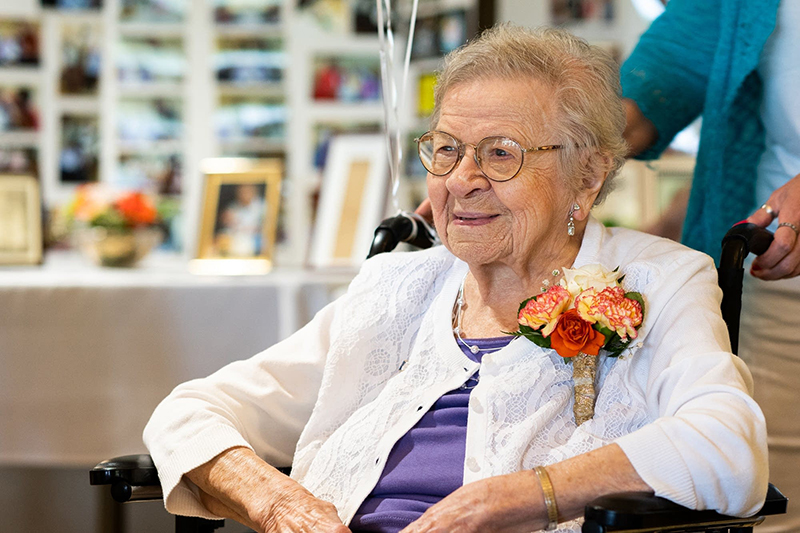 Supercentenarian Evelyn Kleine smiles at friends and family during a celebration of her 111th birthday on Wednesday. - Evan Frost/MPR News

Evelyn Kleine turned 111 years old, making her one of just a handful of supercentenarians in the United States. A supercentenarian is a person who has lived to or passed their 110th birthday.

She was born July 11, 1907 in northeast Minnesota. She moved to Columbia Heights when she was 8 years old and has lived all over the country.

She now resides in Chandler Place, a community home in St. Anthony, a mere three miles from where she lived as a child. She is known around the home as “the supercentenarian,” and the woman who routinely wins at bingo and cribbage.

When told that she is 111 years old this year, she chuckled.

Kleine has lived an independent life: she was married twice, but she outlived both her husbands, and she has no children. A seamstress by trade, she insisted on mending her own clothes, even on her 100th birthday.

“She wanted to do it right,” her great-niece, Joanie Bixler-Anderson, explained. “She continued to drive until she was 99 when she said her car gave out before she did.”

Indeed, Kleine is in superb shape for a supercentenarian — though she can only hear out of her right ear and her memory is not what it used to be — her mind is still sharp and her wit sharper.

“The old forgetter is working overtime,” she joked.

Kleine was asked by just about everyone what the secret to longevity was. She replied that she takes each day as it comes and that she does not smoke, drink or dance.

“And what are we doing on Friday?” Bixler-Anderson asked her. “What do we always do on your birthday? Where do we go?”

Kleine’s eyes squinted behind her glasses for a moment, but when the answer came, they lit up.

“Red Lobster!” she exclaimed, as her great-niece and nephew nodded and laughed. “Red Lobster. I love lobster.”

Even at 111 years old, joy still came readily to Kleine’s face. And when she and Bixler-Anderson sang their favorite song together, cheek to cheek, that joy filled the room.