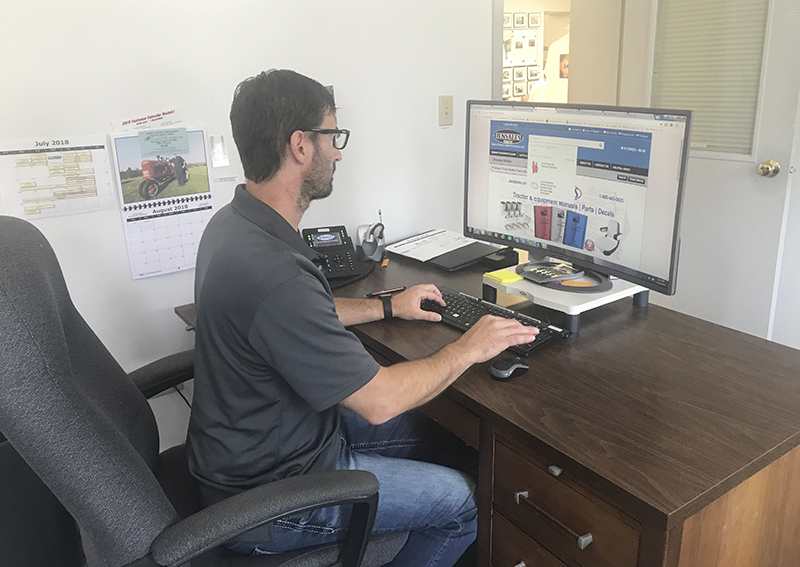 Tim Shaw is the director of online marketing at JenSales in Manchester. - Kelly Wassenberg/Albert Lea Tribune

MANCHESTER — Children are not the only ones who can experience growing pains — businesses can, too. Just ask Tim Shaw, who manages the Jensales website.

Shaw, who has been with the business for eight years, relaunched the company’s website with the assistance of fellow co-worker Brandon Irwin and a host of freelance website developers. The site went live in October and has seen a lot of traffic in the months since.

“So that’s incredibly fast growth,” Shaw said of the statistics.

When sales growth increases so exponentially, there can be drawbacks.

“Actually, our largest struggle now is dealing with growth because growth can actually hurt a company,” Shaw said. “So there’s lots of growing pains.”

Jensales has responded by hiring three new staff members during the last four to six weeks while Shaw works on other related issues.

“The nature of everything you do changes,” Shaw said of the sales growth. “All your processes change. You can’t keep doing the same process when all of a sudden you’re doubling what you’re doing.”

Shaw is working on streamlining processes to increase efficiency — specifically with handling back orders.

Credit for the growth can be attributed to two factors, Shaw said.

First, the number of products on the site has grown from 500,000 at its October launch to 600,000, and Shaw is working on expanding the website to include 120,000 more products. Secondly, the company has put a lot of energy into optimizing its website.

“We’ve spent a lot of time on both the user experience, but also the search engine optimization,” Shaw said.

“Categorizing is very hard,” Shaw said. “When I tell people that we have 150,000 categories on our website, even those who do search engine optimization and web development for a living can’t believe that that’s our structure. It’s difficult to achieve, but it provides the best user experience.”

Those categories allow the user to choose the make and model of their vehicle and view different categories, which narrow their search down even more, making it easier to sift through the website’s content.

Shaw said search engines that use bots to analyze websites also rate the Jensales site, so traffic has increased on the existing products as well.

The parts division of Jensales is relatively new. For 23 years, the company was known worldwide for selling tractor manuals. The parts department was added about five years ago.