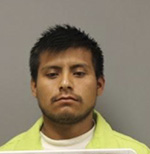 Court documents state Cantor was charged after officers responded to a 911 call Friday from a woman regarding the alleged sexual assault of her 7-year-old daughter.

She reportedly said she came home from work and found the girl with Cantor.

“This is a very serious offense,” she said, noting the presumptive 12-year prison sentence the charge carries.

Through an interpreter, Cantor requested Schwab let him leave the country.

“Can you just send me to Mexico?” he asked.

Schwab set conditional bail at $100,000, contingent on Cantor having no contact with the alleged victim, submit to random testing and follow other requirements.

Cantor’s next appearance is scheduled for Aug. 2. As of Monday afternoon, he was in custody.

U.S. Immigration and Customs Enforcement placed a hold on Cantor Friday. Cantor will remain in Freeborn County custody unless he posts bail. At that point, he would be detained by ICE. If Cantor receives a jail or prison sentence, he will serve that before he is transferred to ICE.