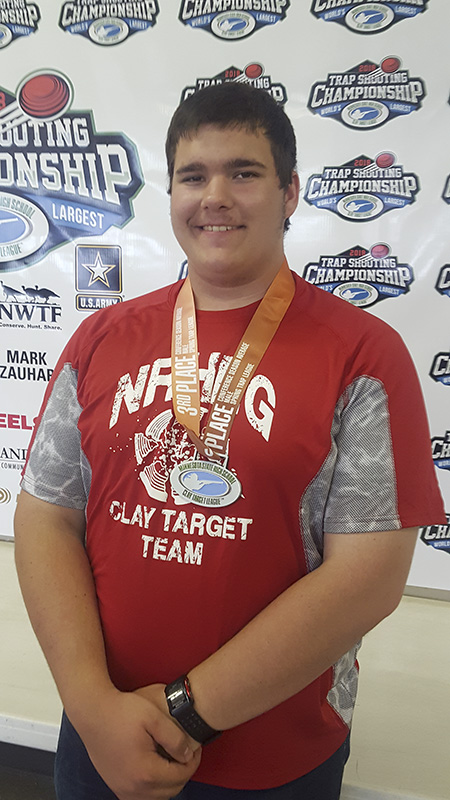 Chancellor Olson stands with his third place medal for season average in the conference. He was NRHEG's lone representative at the state tournament. - Provided

The NRHEG Clay Target squad took its shot at the Class 6A Championship in Alexandria on June 16th.

29 of the teams 57 athletes were present at the event, billed the “World’s Largest Trapshoot,” due to the 8,100 athletes that compete over the nine day period.

Hoping to build on their conference win, the Panther squad shot well with most shooters hitting their average.  However, the team trip to the state tournament was not meant to be, as it is typical for teams to shoot over their average in this event to qualify.

The team was lead by Evan Dobberstein and Braden Routh who each shot a 94 out of 100 possible targets.

The following Friday, Chancellor Olson took part in the MSHSL state individual tournament.  To qualify for the individual tournament, an athlete needs to finish in the top 100 averages in the state for the season.  Just making this elite group is quite a goal as it is, considering there were about 12,000 athletes competing across the state this past spring.

Olson took part on a beautiful day that saw some incredible scores.  His score of 96 out of 100 possible was good for 42nd out of the 110 athlete field.

The day was won by five athletes that each scored perfect 100’s, which is a tournament record for number of athletes making this mark.

The season is essentially over for the team except for five athletes who will take part in the leagues first ever National Trapshoot to be held in Mason, Michigan July 12-15.

Caden Beauvais, Alex Dobberstein, Evan Dobberstein, Aaron Olson, and Chancellor Olson will compete in both individual and a team competition in a field of about 2000 athletes from the various states that currently offer trapshooting as a high school sport.