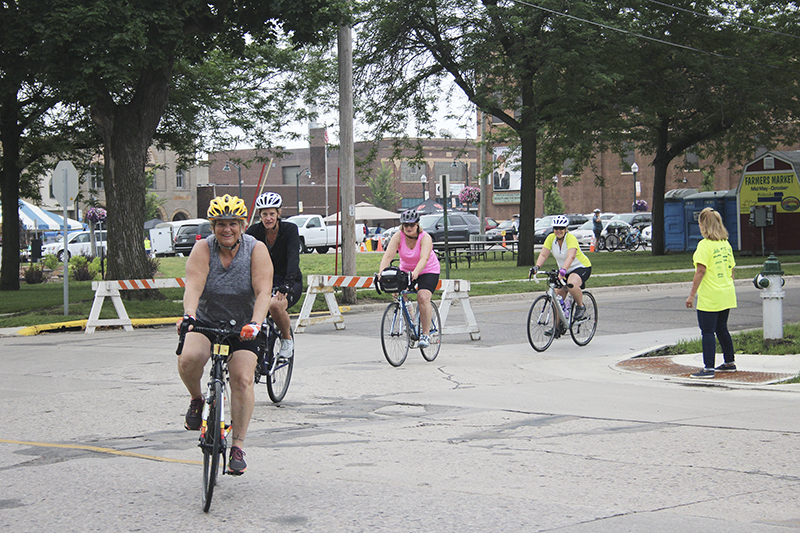 Some members from the Hot Wheels riding group in Austin turn onto Fountain Street to start their ride Saturday morning for Rock 'n' Roll the Lakes. - Sarah Kocher/Albert Lea Tribune

“You know, when we first originally started it, we were thinking if we could get a hundred people we’d be really excited about it, so we’re pretty excited,” Albert Lea Parks and Recreation Director and event committee co-chairman Bob Furland said.

When pre-registration closed Thursday, the event had 133 riders signed up. 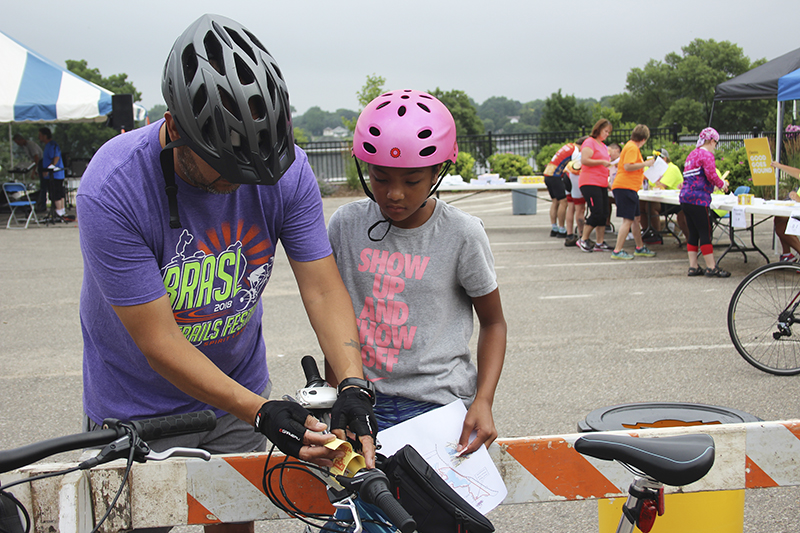 Furthermore, Albert Lea Area Cyclists organizer and event co-chairman Jeff Englin said a large portion of those riders are from outside the area. Of the cyclists pre-registered, 45 were from the Albert Lea and Hayward areas. Everyone else was from a different area, including riders from La Crosse, Sioux Falls, Maple Grove and Waterloo, Iowa.

Austin riders Ann Mueller, Robin Brown and Renee Hemingway — the Hot Wheels — are a bit closer to home, but came to Albert Lea for the ride.

Brown and Hemingway are using the ride as training for the RAGBRAI — Register’s Annual Great Bicycle Ride Across Iowa.

“We are so thrilled about this ride,” Mueller said. 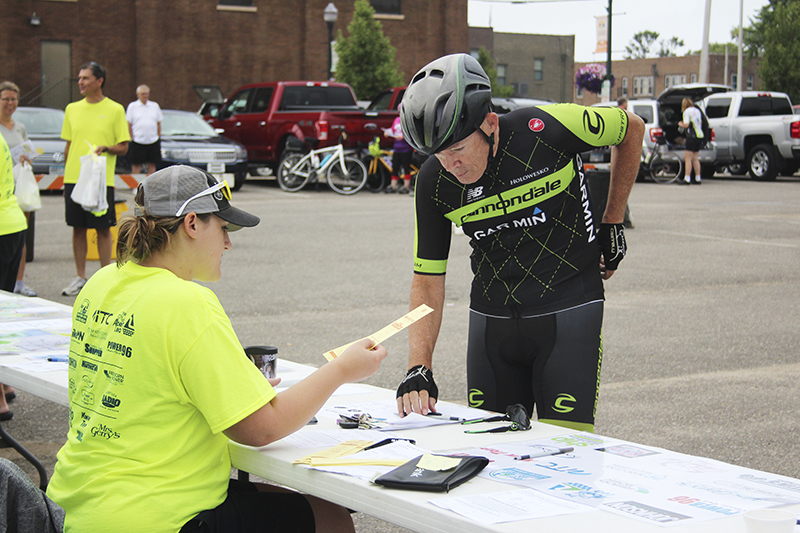 A rider checks in before heading out on his bike. – Sarah Kocher/Albert Lea Tribune

They saw Rock ‘n’ Roll the Lakes advertised at a ride in Austin and decided to come down. The group tries to do local rides. Brown said she was excited to be a part of Albert Lea’s first, and hopes to see it continue.

“We’re looking forward to this being a new ride,” Hemingway said.

Locals Ray Talamantes and Alyvia Montes also took part, opting for the 10-mile option out of three lengths that also included 30 and 50 miles.

It’s also a chance for the two to have a grandfather and granddaughter day.

“We just wanted to try something new,” Montes said.

Rock ‘n’ Roll the Lakes was co-sponsored by the Bike Alliance of Minnesota, who Englin said proved useful partners. The alliance co-sponsors the Mankato River Ramble and the St. Paul Classic, so it was able to give recommendations and remind the Albert Lea committee of things they may not have thought of. 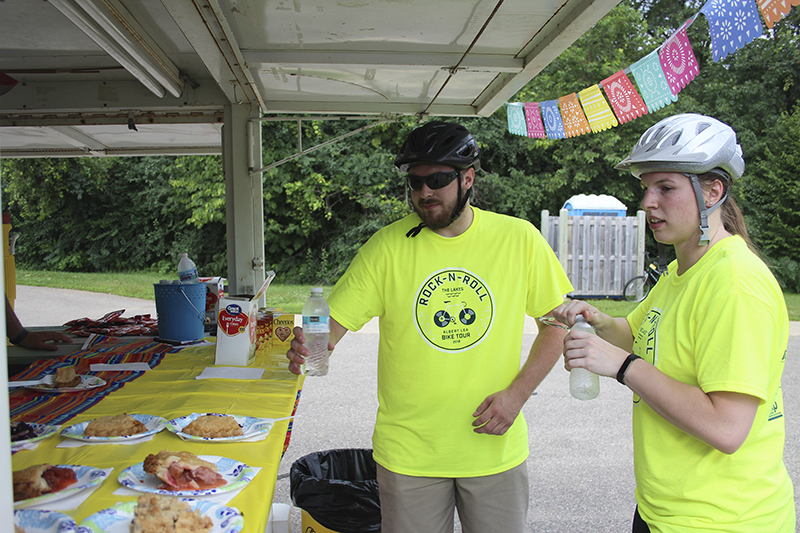 Emily Belshan and Josh Howe accept water and pie near the boathouse Saturday during a rest stop on the 10-mile route. – Sarah Kocher/Albert Lea Tribune

“They’ve been key in making sure we’ve got all our ‘I’s dotted and our ‘T’s crossed,” Englin said.

The Bike Alliance of Minnesota has also watched the River Ramble bring in around 3,000 to 4,000 riders, Englin said, and with the support shown in Albert Lea, the volunteer system the group put together and the trails, Englin said they’re expecting to grow to a similar size.

Convention and Visitors Bureau Executive Director Susie Petersen said the ride is a good opportunity for those outside Albert Lea to see what the town has to offer.

“We want people to enjoy Albert Lea and the community while they’re here, so that’s why the ride is in the morning and then they can enjoy, you know, there’s all kinds of activities going on,” Petersen said.

According to Englin, that is the ride’s second priority.

“The primary goal for the group is to raise funds for the trail system and safe cycling in and around the Albert Lea area,” he said. 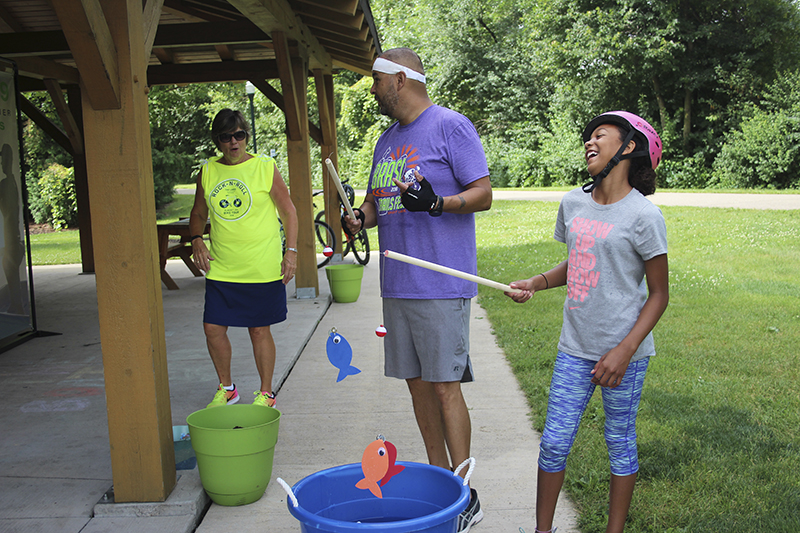 Alyvia Montes said catches two fish at the boathouse rest stop Saturday during her ride with grandfather, Ray Talamantes. The boathouse also had a beanbag toss and a photo op with a banner for the 2019 governor’s fishing opener in Albert Lea. – Sarah Kocher/Albert Lea Tribune