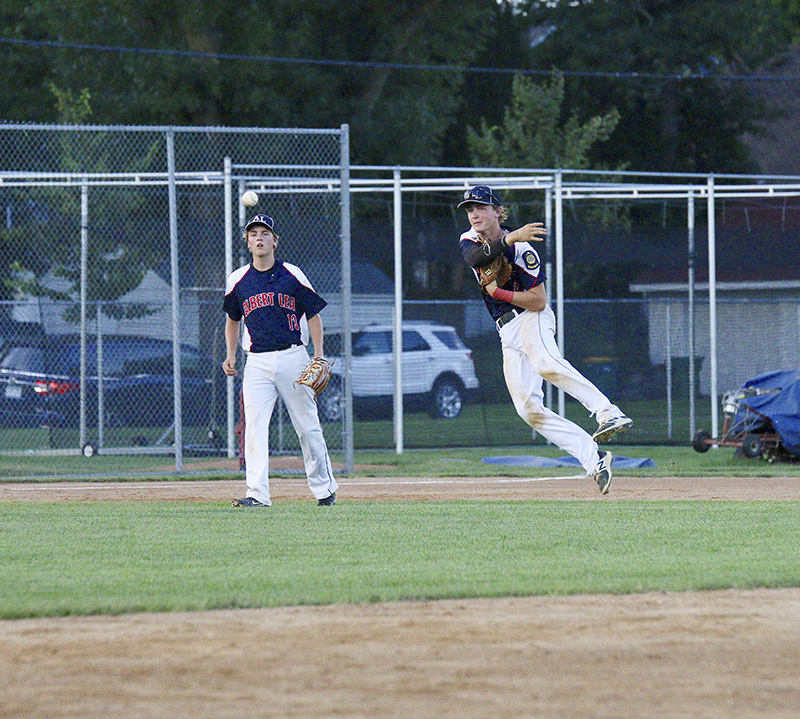 Ty Harms makes the throw to first base for an out Sunday night against Austin. Post 56 would go on to lose the game, - 7-2. Provided

Albert Lea was unable to get the bats going, only recording four hits to Austin’s 14. Post 56 ultimately fell to Austin, 7-2.

The Albert Lea defense held strong in the first inning, but despite Zach Edwards leading off with a walk, the team was unable to capitalize and score any runs. 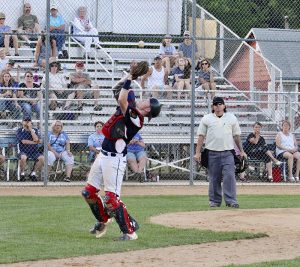 Zach Edwards makes the play on a popup behind the plate Sunday night against Austin. – Provided

Austin was the first to jump on the board with a run in the top of the second inning. Albert Lea responded with a run of its own in the next half inning.

Koby Hendrickson led off the inning with a walk, followed by another walk from Ty Harms. Hendrickson scored on a sacrifice fly to center field off the bat of Parker Andersen.

A solid one-two-three inning for Post 56 gave them enough momentum to take a lead in the bottom of the third. Alex Goodmanson reached first after being hit by a pitch and came around to score when Garret Piechowski grounded out to first.

Albert Lea was unable to hold on to their lead for very long, as Austin put together a three-run inning in the fourth. Anderson and Harms both got on board in the bottom of the inning, but a strikeout ended the inning before they could cross the plate.

Austin increased its lead in the fifth with three more runs, and that would prove to be insurmountable for Albert Lea.

Post 56 strung together a couple of singles in the seventh inning, coming from Goodmanson and Brock Hammer, but it wasn’t enough to get a rally started.

Brock Hammer came in for relief in the sixth inning and pitched the rest of the game. Hammer allowed zero runs on three hits.

Post 56 falls to 7-3 on the season and will be back in action when it travels to Rochester Thursday night to take on John Marshall.