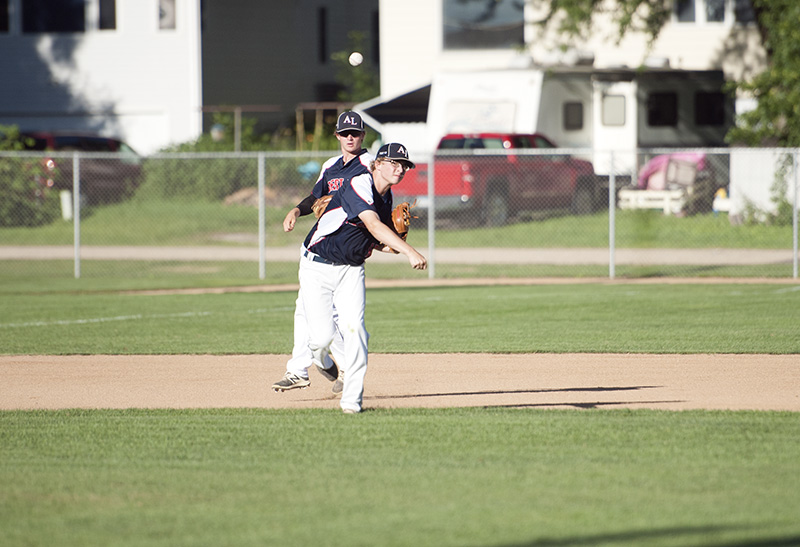 Brock Hammer makes the toss to first from third for the out Tuesday night against Faribault. Albert Lea won the matchup 10-7. - Tyler Julson/Albert Lea Tribune

Despite trailing late in the game, Albert Lea used a big fifth inning to pull away from Faribault, 10-7.

Albert Lea wasted no time in putting the first runs up on the board. In the bottom of the first inning, Ty Harms reached first with a walk and was moved to third on a stand-up double from Zach Edwards. With two men in scoring position, Alex Bledsoe hit into a ground out that scored Harms. Garret Piechowski then hit a single that brought Edwards in for another run. 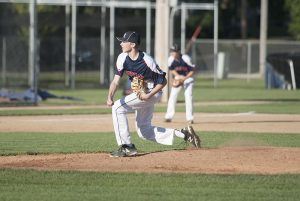 Faribault got two men aboard in the second inning, but a strikeout from pitcher Koby Hendrickson ended the inning before they could score.

With two outs in the third inning, Bledsoe was hit by a pitch to reach base, and was hit in on back-to-back singles by Piechowski and Parker Andersen.

Faribault tied the game in the fourth inning after loading the bases with two outs. A single and a double that struck the outfield fence just below the foul pole brought in the three runs.

Faribault took an outright lead with two more runs in the fifth inning, taking a 5-3 lead into the bottom.

Albert Lea responded with a multi-run inning of its own, scoring seven runs to take back the lead. Brock Hammer took a walk to open the inning and Ty Harms got aboard on a single. Edwards then crushed a ball to center field that snuck past the outfielder and scored two runs.

Back-to-back walks from Bledsoe and Piechowski out two more men on base, and a passed ball scored Edwards. Ian Ball and Carson Goodell each brought in a run with nearly identical hits over the third base bag. The last run of the inning came in off the bat of Hammer, who hit a double to bring in Goodell.

With a commanding five-run lead heading into the sixth inning, Albert Lea gave up two runs in the seventh. However, the rally would stop there, securing a win for Post 56.

Alex Goodmanson finished off the final inning of the game, allowing two runs on two hits, striking out two.

Post 56 will be back in action on Thursday when they travel to Rochester to take on John Marshall.