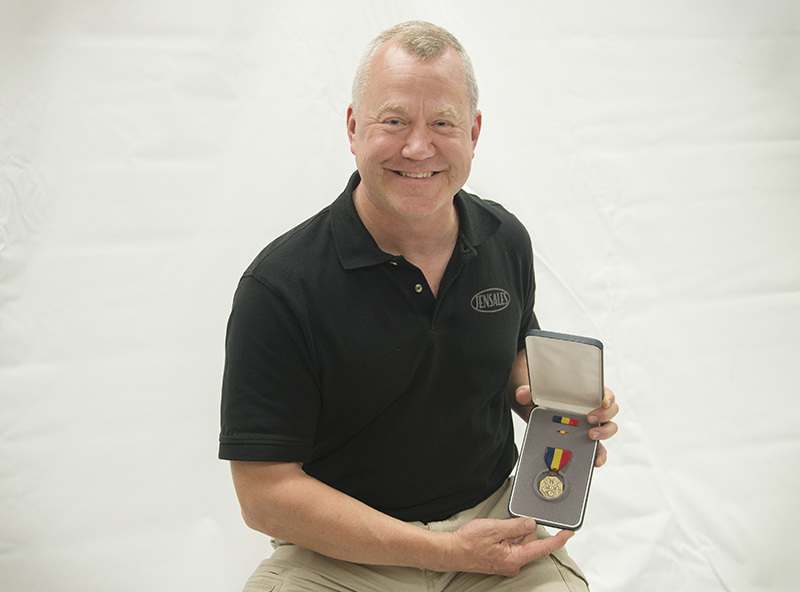 Paul Jensen has been awarded the Navy and Marine Corps Medal for Heroism for his efforts in responding to a helicopter crash in February 2016 while he was visiting Hawaii. Colleen Harrison/Albert Lea Tribune

Paul Jensen, with the United States Navy for over 25 years at the time, was in Hawaii to teach a senior officer leadership course. He was spending the day before teaching the course touring the USS Arizona Memorial and the World War II Pacific museum with his wife and two of their friends who met him on the island. Their friends had asked Jensen about his time inspecting the USS Arizona as a Navy diver, when Jensen said he heard the sounds of a helicopter going through autorotation — a maneuver pilots use when they’re experiencing some sort of mechanical failure.

Jensen’s wife saw the helicopter crashing into the water before he did. 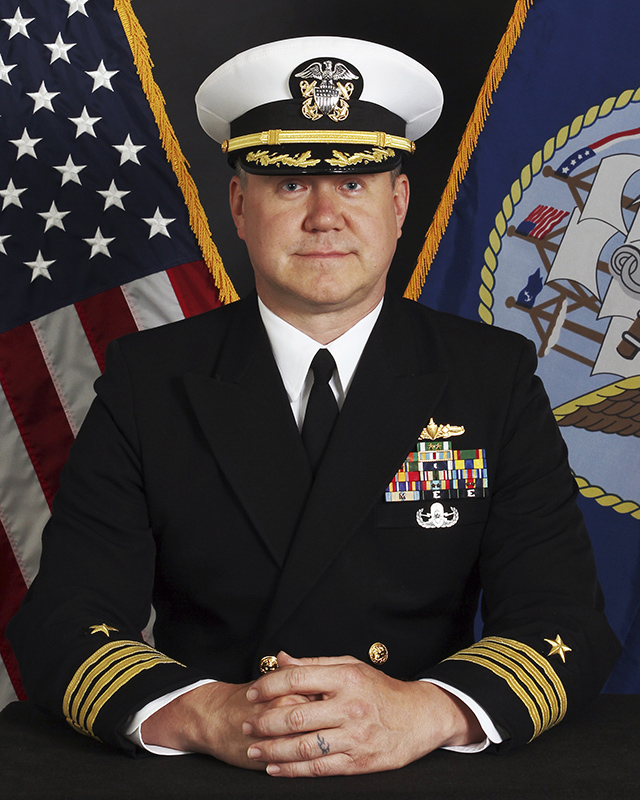 Jensen is approaching his 30-year mark with the United States Navy, at which point he will retire. Provided

“She told me, ‘You better get over there,’” Jensen said.

He ran over to the speculation point facing the memorial where the crash had happened, finding a dock nearest to the crash. Jensen said he could see three people already in the water trying to help, and found park police near the scene. He told them he was a Navy diver, volunteer firefighter and emergency responder, and asked if they wanted help in the water. Upon hearing a resounding “Yes,” Jensen dove in the water to find out what he could do.

The people already responding had figured out there were five originally on board the helicopter for an open-door sightseeing tour, Jensen said. Open doors meant the passengers were harnessed in. Four of the people on the helicopter were outside of the structure, but one young man was still trapped inside, tangled up in his harness.

Jensen said he and the others in the water figured out the helicopter was upside down and about 12 to 15 feet below them, in water muddied with jet fuel. Another man in the water had a rescue knife the responders passed around, somehow not dropping it, Jensen said. They took turns holding their breath to swim down and attempt to cut the trapped passenger free. 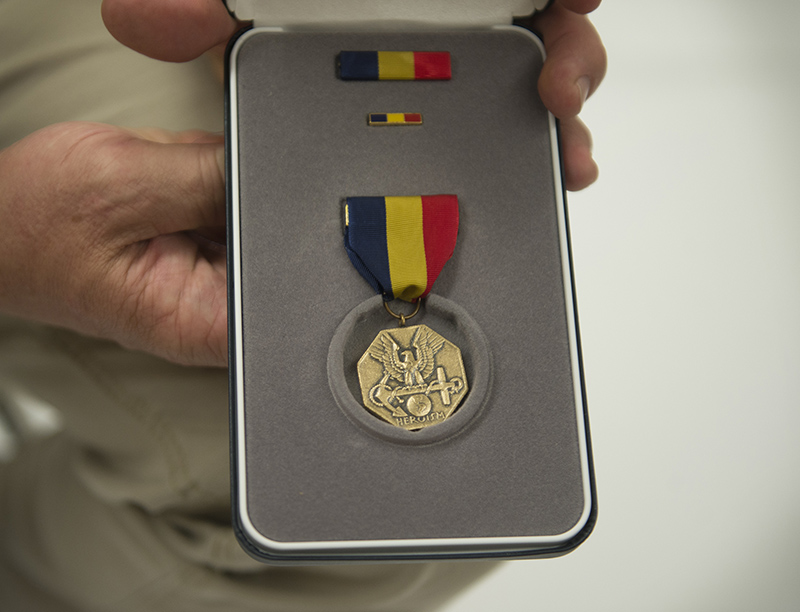 The Navy and Marine Corps Medal for Heroism is one step up from a Bronze Star and is the highest non-combat decoration awarded for heroism by the U.S. Department of the Navy. Colleen Harrison/Albert Lea Tribune

The young man was eventually freed from the harness and brought to the surface, where a pulse was found and he was taken to the hospital. Jensen said he had been trapped underwater for too long, and that he died three days later.

Those in the water had been able to get the young man’s parents and brother out with minor injuries. The pilot had to be taken out on a backboard, as he had broken his back.

Jensen said he later found out the helicopter had a gearbox mechanical failure, resulting in the loss of the tail rotor. He said without the pilot — previously an Army warrant officer — and his quick thinking, the crash would have been even worse.

“He pretty much saved the whole thing, because he did everything he possibly could have,” Jensen said of the pilot’s efforts.

Jensen said he “went back to work” after the crash, teaching his course the next day. He happened to talk about the crash with another man he was teaching with, but other than that, Jensen went back home to Alden and “didn’t think anything of it.”

Jensen kept busy running Jensales — the Manchester business he bought from his father about 20 years ago, working as a volunteer firefighter with the Manchester Fire Department and spending time with his wife and their two daughters. In the meantime, he had moved on to a new Navy command unit. They change every two or three years, he said, and between fact checking and going through the chain of command for approval, it took over two years for Jensen to find out he will be awarded the Navy and Marine Corps Medal for Heroism.

He will recognized for his efforts and officially receive the medal — which is one step up from a Bronze Star and is the highest non-combat decoration awarded for heroism by the U.S. Department of the Navy — during a November ceremony in Washington, D.C.

“I was, you know, honored and pleased, because of the people who had gone before me that have done these things, motivate people to go out there and do the hard thing, do the right thing, help when they can,” Jensen said of his reaction to receiving the medal. “I had a fairly specific set of skills, with just being a diver and having EMR training and such, I was like, ‘Well, I have to get in there, I have to get in and help.’”

While Jensen said he appreciates the sentiment, he maintains he was doing what he was supposed to do that February day.

“Certainly not why I jumped in the water. Certainly not why I was there that day or did what I did that day, was for any of this kind of thing. But yeah, it’s nice to get recognition,” he said. “I know a hundred guys who would’ve done the same thing. … It wasn’t anything terribly special. It was right guy at the right time.”

After Jensen and his family go to the award presentation in November, he will have just a few more months before retiring from his Navy career. Those who are not admirals in the Navy retire at their 30-year mark, he said, and he will reach 30 years in June 2019.

Jensen joined the Navy at 23 years old in 1989, following his graduation from the mechanical engineering program at Northwestern. He initially saw military service as a way for him to pay for school. Shortly thereafter, he became a Navy diver and started working in explosive ordnance disposal special operations. Those areas kept Jensen enthralled, turning his Navy service into more than a means to an end for school finances. His 10 years of active duty service took him to Guam, Thailand, Korea, Australia, Japan, the Philippines and others, cleaning up World War II rounds from many underwater locations. After moving to the Reserves, Jensen was mobilized in 2005 for a year of duty in Kuwait.

While approaching the end of his run with the Navy is bittersweet, Jensen said he is ready to be done.

He has no regrets.

Livelihood: owns Jensales in Manchester, volunteer firefighter for Manchester and about to retire from 30-year U.S. Navy career

Interesting fact: recently helped one of his daughters build a car that she took to Chapel Con