MASON CITY — Dr. Stephen Thorn, an OB-GYN doctor who retired from Mercy Medical Center-North Iowa in May, is being sued for medical malpractice. 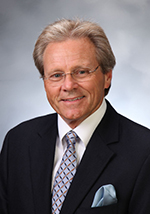 Terra Gaffney, a Rockwell resident, stated that during a prenatal visit on Oct. 4, 2017, Thorn “committed an unconsented and not medically indicated physical touching” of her, according to a lawsuit filed in Cerro Gordo County District Court on Wednesday.

“That is our allegation, and it speaks for itself,” Hamilton said.

“I’m not gonna go into anything other than the public record,” Hamilton added when questioned further about the lawsuit.

Thorn has not been charged with a crime over allegedly touching Gaffney without her consent during an appointment.

The lawsuit details a voicemail Thorn left on Gaffney’s cell phone on Oct. 12, 2017.

Those comments also included statements about Gaffney’s protected, past medical history that other clinic employees did not need access to, court documents stated.

Court documents indicate Gaffney heard that voicemail on Oct. 13, and it caused her “physical and emotional distress,” leading her to change prenatal care providers.

The lawsuit alleges Thorn and other OB-GYN Clinic employees violated the duty of care owed to Gaffney, and that Thorn touching Gaffney without consent on Oct. 4 violated the “ordinary standard of care” owed to her.

Thorn retired in May, after helping deliver more than 7,000 babies in his career. He worked at Mercy since 2012, after more than 20 years of experience as a doctor in Albert Lea.