Ride aims for 100 tractors in 10th year of annual event 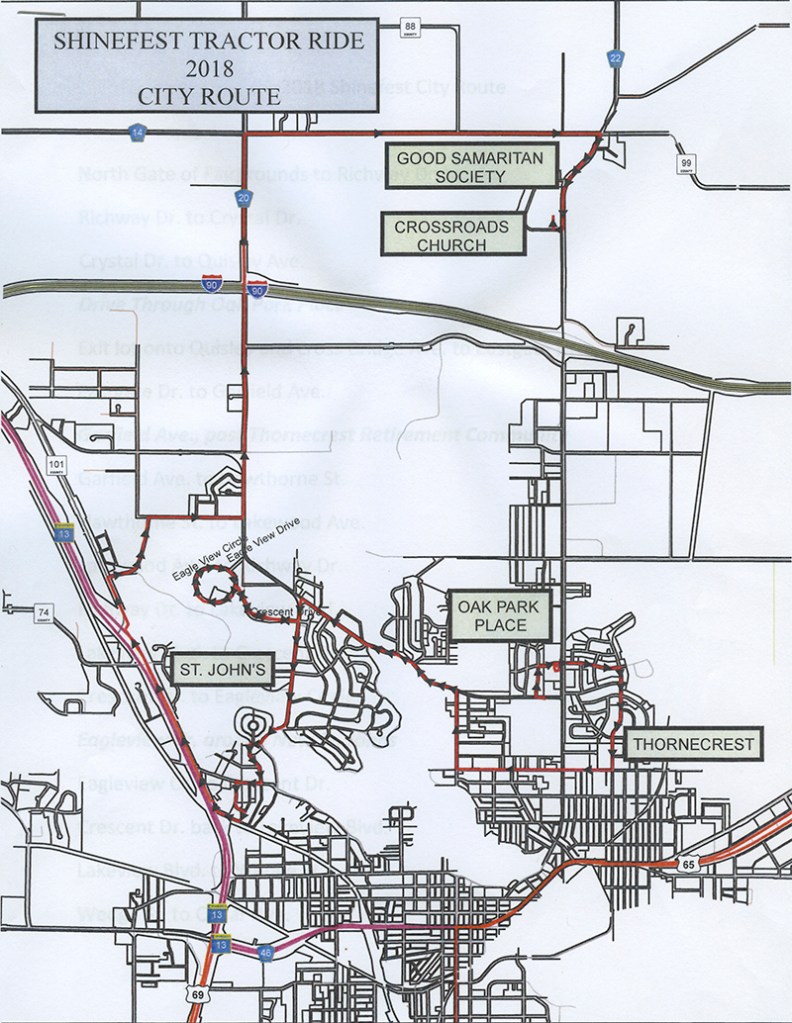 In addition to the city route, tractors will also travel to Hartland and Freeborn on a route totaling just short of 55 miles. - Provided

Drivers and viewers along Saturday’s Shinefest tractor ride route should prepare once again for the long green and red line as participants ride to nursing homes in Albert Lea and then to a few spots in surrounding communities.

He said he’s hoping to hit 100 tractors for the 10th year of the ride. On average, fellow organizer Mark Light said attendance is fairly steady, with between 75 and 85 tractors participating. Of those, he estimated at least 3/4 are returning riders.

“They’re some of our best ambassadors because they’re bringing their friends,” Light said.

For many, it is a family affair; Nordean Krueger participates with all three of his sons, and one of his sons also brings along Krueger’s granddaughters.

“It’s something that they enjoy, to be with Grandpa, I guess,” Krueger said.

He sees the ride as an opportunity to get out and enjoy camaraderie with other riders.

“Ones with old tractors, they’re the nicest people in the world,” he said.

Krueger also collects old John Deere tractors, so the ride is “right up my alley.”

The ride raises money for Shinefest, an annual event in which members of Albert Lea’s faith community pitch in together to help other community members. Funds go to benefit local families, Light said.

This year’s route is just under 55 miles, Light said. Breakfast and registration both begin at 7:30 a.m. Saturday in the Livestock Building at the Freeborn County Fairgrounds. Tractors will line up at the Fairgrounds at 8:30 a.m. and leave at 9 a.m. The group will drive past Oak Park Place, Thorne Crest Senior Living Community, St. John’s Lutheran Community on Fountain Lake, St. John’s Lutheran Community, Luther Place and Good Samaritan Society of Albert Lea.

“That’s the best part of the ride as far as I’m concerned,” Light said. Grotsun said residents of the nursing home seem to enjoy their drive-by.

Afterward, the tractors will stop at Crossroads Church for coffee at 10:20 a.m. — but times are ballpark, Light said. This year, riders who are unable to make the whole ride can return to the Fairgrounds, Grotsun said.

Those continuing with the ride will travel to West Freeborn Church in Freeborn, where they will eat lunch at 11:50 a.m. Riders will then stop at 2 p.m. at Cross of Glory Church in Hartland before leaving for Central Freeborn Church for ice cream and pictures at 3:45 p.m.

Light said people along the route will often watch as the tractors go by.

“Every year, it seems there’s a few more people there watching for us as we go by, which is really cool,” Light said.

Riders will return to the Fairgrounds and aim to be done by 5 p.m.

“The whole world looks different going down a road at 14 miles an hour,” Grotsun said.

Tractors participating in the ride should be at least 40 years old and cable-less, Light said. Other than that, there are no restrictions.

“We’ve got anything from nice, shiny, looking better than they were when they were built tractors to a lot of them that — the term is ‘in their working clothes,’” Light said. “… If it’s got brakes and runs, you’re welcome to show up.”