Memorial services for Robert L. Christopherson will be at 1 p.m. Monday at Bonnerup Funeral Service in Albert Lea. Visitation will take place one hour prior to the service. Military honors will be performed by Albert Lea area veterans organizations. 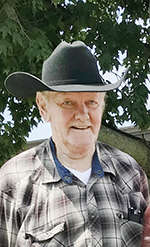 Robert Lowell Christopherson was born April 27, 1936, in Albert Lea to Walter and Gladys (Briggs) Crhistopherson. He attended and graduated from Albert Lea High School. On Jan. 8, 1955, Robert was united in marriage to Barbara (Crockett). To this union, five children were born.

Just a short time after marriage, Robert went to serve his country in the United States Army. He served for two years before his honorable discharge. After his service, the couple spent time in many places across the country before settling in Albert Lea in 1970 to be closer to family.

Bob worked many jobs throughout his life. A few highlights include working in the oil fields in Colorado, returning to Albert Lea to work at Wilson & Co. for 20 years and driving truck after he retired. When he wasn’t working, you could find Bob fishing, camping or tinkering in his garage. He loved his acreage, where he had horses, tractors and enjoyed being outdoors. Bob always had a good sense of humor and enjoyed conversation with family and friends over a cup of coffee.

He was preceded in death by his wife, Barbara; both parents, Walter (Gladys) Christopherson; and sisters Marsha, Ruth and JoAnn.