Memorial services for Ruth J. Fuller of Albert Lea will be at 10:30 a.m. Monday at Bonnerup Funeral Service in Albert Lea. The Rev. Kent Otterman will officiate. Visitation will be one hour prior to the service. Interment will be in Hillcrest Cemetery. 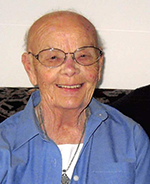 Ruth was born Sept. 26, 1920, in Hancock County, Iowa, the daughter of John and Mary (Mahoney) Muehe. She attended public school in Wesley, Iowa. On Sept. 3, 1955, she was united in marriage to Leo Fuller in Albert Lea.

Ruth had been employed as a telephone operator in Missouri, Albert Lea and in an Army hospital in California. She also was a cashier for the Albert Lea public school system.

Ruth enjoyed playing cards, trips to the casino, spending winters in Arizona and summers at Kiesler’s campground. Foremost for her was spending time with her family and grandchildren.