Ryan D. Bendickson, 38, of Norwalk, Iowa, and formerly of Northwood, passed away Monday, July 16, 2018, after a four-year battle with liver failure. 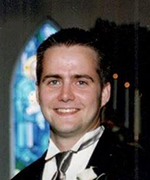 Memorials may be directed in care of Ryan’s family to the Ryan Bendickson Memorial Fund.

Ryan Dean Bendickson was born Sept. 6, 1979, to Steve C. Bendickson and Eloise E. Sheldahl in Mason City, Iowa. He was baptized and confirmed at First Lutheran Church. He grew up in Northwood. He attended and graduated from Northwood-Kensett High School in 1998. Ryan continued his education at Waldorf, graduating and earning his associate’s degree in 2000. His education brought him to Iowa State University, where he would graduate with a bachelor’s degree in management information systems and transportation logistics in 2003. This education directed him into the field of transportation dispatching. Working for many years, he made his way into IT at 3PL Logistics in West Des Moines.

On Sept. 18, 2012 Ryan married Heather Litchkey and experienced the joy of becoming a stepdad to Abby.

Ryan was an avid sports fan, keeping tabs on the Cubs and Hawkeyes at all times. In his early years he found a passion for running, completing multiple 5ks and in 2008 completing the Des Moines Marathon.

Those who have preceded him in death are his grandfathers Arthur Bendickson and Maurice Sheldahl; aunt, Patty Bendickson; and uncle, Richard Carpenter.