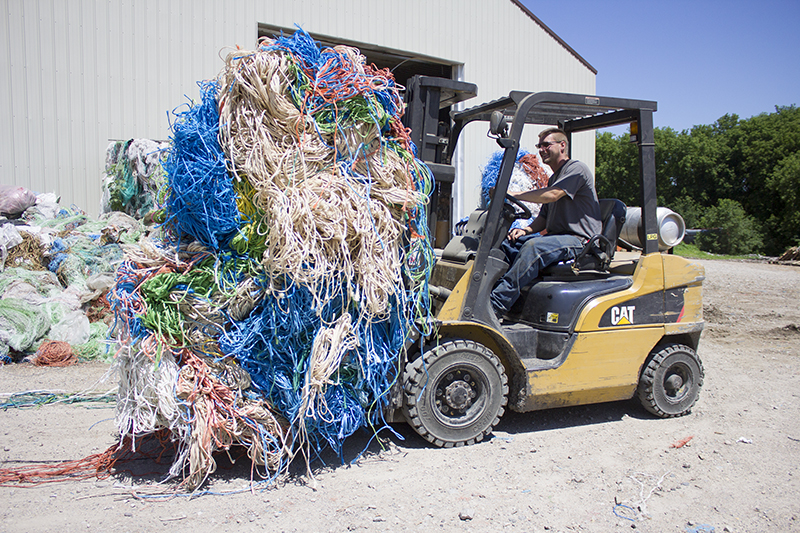 An I-90 Recycling employee hauls twine Thursday. The company is facing litigation from Freeborn County for allegedly violating its conditional use permit. - Sam Wilmes/Albert Lea Tribune

Lawyer: Owner says he is willing to address concerns given

Freeborn County is alleging a local recycling company continues to violate ordinances and its conditional use permit.

In filing the complaint in Freeborn County District Court, the county alleged Mike Peterson, owner, operator and manager of I-90 Recycling, refused to provide required testing and certification of occupancy for one of the three buildings where the business operates.

The county alleges the business is violating its conditional use permit by not storing all materials and other operating activities in the three buildings and not keeping the site in a “neat and orderly manner.”

“The defendants are in violation of the aforesaid conditions to the permits listed … above and have been for quite some time, and have willfully and wantonly refused to comply with administrative efforts to obtain compliance with the permit conditions,” the county said in the complaint.

“The county has compiled a lengthy photographic history of the outside storage of items on the site, the failure to keep the premises in a neat and orderly appearance, and the attempts to obtain voluntary compliance with the terms and conditions of the conditional use permits issued to the defendants.”

Freeborn County is requesting I-90 Recycling plant a three-row windbreak of trees south of the three buildings.

In a letter to the Freeborn County Board of Commissioners dated Tuesday, Peterson said he removed outdoor twine storage accumulated since 2015 resulting from Bridon Cordage selling and its successor — Great Lakes Polymer — halting its recycling operation.

“I acknowledge that my operating has evolved based upon market conditions and that I now recycle additional materials that I did not anticipate when I received my initial conditional use permit to cover these items.

“I have offered to repeatedly to bring this matter to attention, but no one will hear my request.”

The county alleges I-90 Recycling is violating state building code provisions and has “willfully refused to have the boiler in one of the buildings certified as safe for operation.” It said they are storing recycled concrete and other materials on the site after their permit expired. 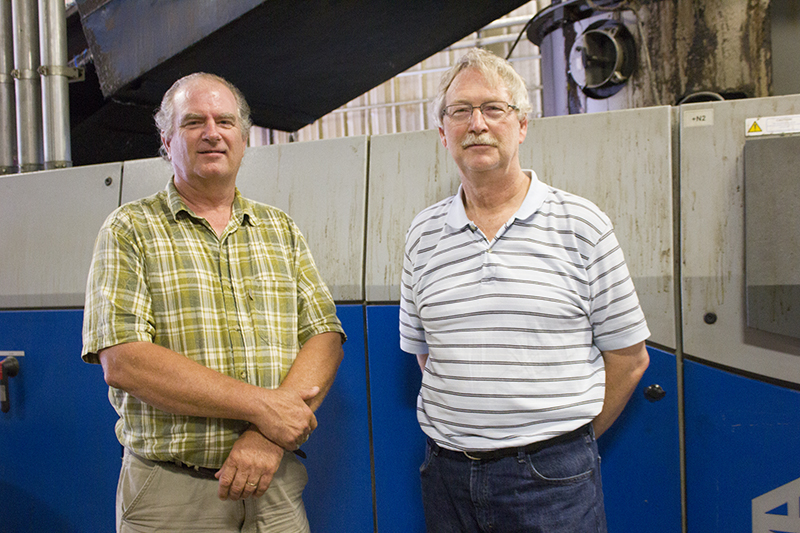 I-90 Recycling owner Michael Peterson and I-90 Reprocessing LLC co-owner Terry Van Kampen are overseeing the company as it fights a lawsuit brought by Freeborn County. – Sam Wilmes/Albert Lea Tribune

The county requests I-90 Recycling adhere to conditional permits and remove materials on the site not allowed under the company’s permit.

Freeborn County is seeking a permanent injunction prohibiting the business from receiving recycling items on-site except approved twine and cardboard, storing materials outside the buildings and “conducting any activities related to recycling outside of the buildings other than the delivery of materials to the site.”

In the letter, Peterson denied accusations he has refused to have his facility meet building codes.

“There are, however, many areas of the building code that require interpretation,” he said in the letter.

“I did not agree with many of the interpretations made by (former Freeborn County Planning and Zoning Officer Wayne Sorensen). I have repeatedly communicated my intention to have my facility comply with all code requirements. If some requirements are impractical, I intended to notify you and ask for your assistance in making these, providing time to meet them or requesting your waiver as a last resort.”

Peterson said his state-certified building inspector is expected to complete his follow-up inspection of the facility this month.

“His report will be disclosed promptly,” he said.

“In the meantime, I have hired an independent engineer to complete a ventilation analysis and design a canopy over the existing conveyor to meet code,” he said.

Peterson said he is scheduled to have additional exits and concrete slabs installed.

“I wish to remain a contributory business to the Freeborn County economy,” he said. “My business provides commercial recycling services to the (approximately 24) businesses on the attached list, and I am sure you can ask them about our efforts to recycle and reuse materials in an effort to keep those items out of the landfill.

“I currently employ 13 full-time employees and hope to find a cooperative way to continue serving our business community.”

Scott Anderson, lawyer for Freeborn County, said he had not received the letter as of Thursday morning.

“It’s unfortunate in that we have an individual whose operating with, the only phrase there is to use, a total disregard for the uses that are allowed to be conducted on the property,” he said.

Anderson said it is “indisputable” there are improper activities taking place at I-90 Recycling because of past inspections.

“The buildings were not built to constitute the activities taking place,” he said.

Anderson disputed Peterson’s statement that Sorensen did not properly interpret the situation.

“Sorensen was 100 percent correct in his interpretation of the matter,” Anderson said, noting the county unsuccessfully tried to get Peterson to voluntarily comply with ordinances and state building codes.

“We’ve reached the point where we are now faced with a realization that that’s not going to happen,” Anderson said.

Matt Benda, lawyer for I-90 Recycling, said the company hopes a resolution to the case ensures the company continues to operate.

Benda said the county and recycling company “need to find a mutual resolution, meaning to fix or evolve the conditional use permit and then address any concerns that the county has.”

“Mike is willing to address those concerns, it’s just an investment,” he said. “If he’s going to make that investment to make these improvements that they’re asking for, he has to have the business to support that investment. We need to find a mutual resolution.” 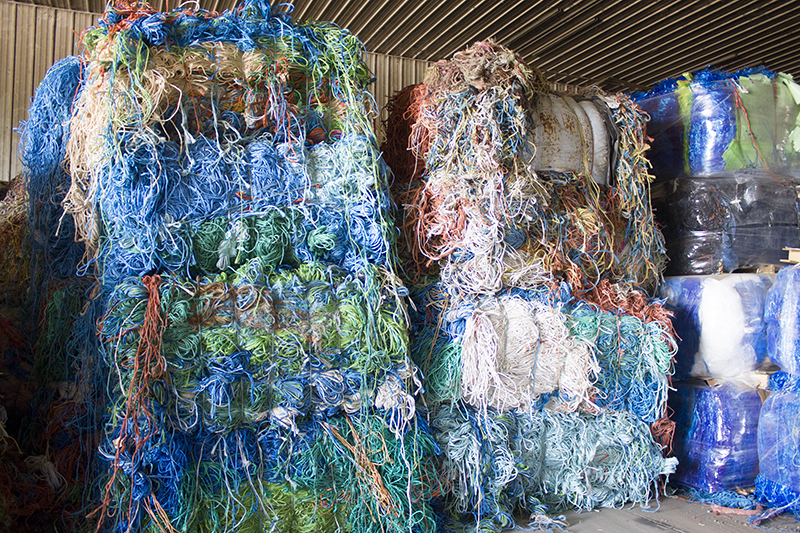 The twine is stored in an on-site building. – Sam Wilmes/Albert Lea Tribune