Theresa B. Schmidt, 51, of Albert Lea was born April 5, 1967, in Lakenheath, England, the daughter of Robert J. and Patricia A. (Piety) Schmidt. The family moved to Germany, where she attended elementary school, and later moved to Slayton, where she graduated from high school. Theresa received her Bachelor of Arts degree from St. Benedict’s College in St. Joseph and her masters degree in library science from the University of Iowa. 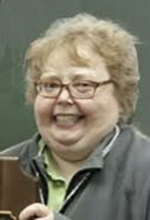 Her first library position was in Glenwood. After two years, she came to Albert Lea, where she was employed by Albert Lea Public Library for more than 20 years.

Theresa had a great love for the Albert Lea community. She felt welcomed and embraced and was passionate about all the city has to offer. She worked diligently at the library to make sure it had something to offer for everyone. In addition, Theresa was an active member of the Lions Club, where she served as president twice and served on the board. She was honored to receive the Melvin Jones Fellow Award for dedicated Humanitarian Services from Lions Clubs International. Theresa also served on the Albert Lea Children’s Center Board of Directors.

She enjoyed politics, watching all type of movies, listening to music and traveling.

Theresa will be greatly missed by her father, Robert “Bob” Schmidt, of Albert Lea; and her sister, Katrina Schmidt, of Springfield, Oregon.

She was preceded in death by her mother, Patricia A. Schmidt.

At Theresa’s request, there will be no service.