Funeral services for Thomas “Richard” R. Thompson of Albert Lea will be at 2:30 p.m. Saturday at Bonnerup Funeral Service in Albert Lea. The Rev. Kent Otterman will officiate. Interment will be in Graceland Cemetery. Military honors will be accorded by the Albert Lea area veterans groups. 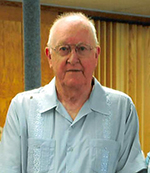 Richard was born July 22, 1929, in Steele County, the son of Thomas and Iris (Shorey) Thompson. He graduated from Ellendale High School in 1947 and following graduation enlisted in the U.S. Army, serving during the Korean conflict stationed in Guam.

Richard worked at Wilson & Co. for more than 38 years. Afterwards he did various odd jobs.

He was a hardworking man and took pride in his yard work. He was proud to take care of Harry Neal’s yard for many years. Richard was a member of the Veterans of Foreign Wars and American Legion clubs, enjoyed golfing, bowling and was a master at putting puzzles together. He enjoyed road trips to see family and friends and his favorite TV show was “The Price Is Right.”

His children would like to extend a special thank you to all the staff at Prairie Senior Cottages for taking wonderful care of their dad.