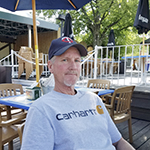 Todd attended Albert Lea High School and lived in Lancaster, California; and Rochester before setting in Colorado Springs in 1989.

Todd enjoyed motorcycle racing, NASCAR, fishing and playing golf. He is remembered for his sense of humor and his love for his family, even if they didn’t see him as often as they would have liked.

He was employed by GE Johnson the past four years as a journeyman carpenter — most currently on the U.S. Olympic Museum being built in Colorado Springs. He loved his job and was proud of his work on the Children’s Hospital and Broadmoor West, both located in Colorado Springs.

He was preceded in death by his grandparents Hjalmer and Mildred Bakken and Ken and Harriet Voshell; and his stepmother, Bev Voshell.

His memorial service was at 10 a.m. Tuesday at Chapel of Memories in Colorado Springs.