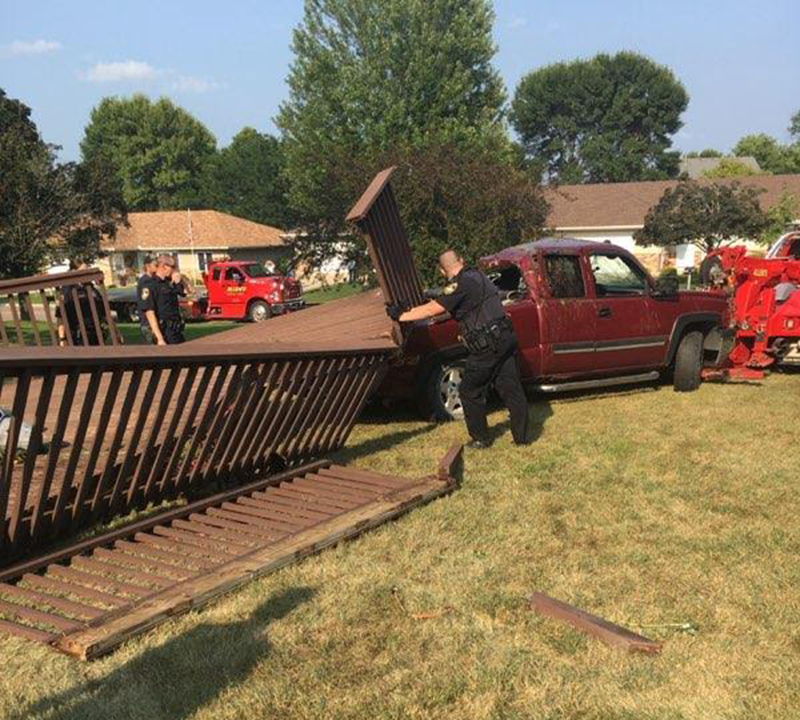 Police pick up deck debris Sunday after a truck crashed and dislodged the deck from the house at 1813 Bayview Drive. - Provided

An Albert Lea woman was injured Sunday after the truck her 12-year-old son was driving allegedly dragged her a distance and struck the deck of a neighboring home.

Albert Lea officers were dispatched at about 4:50 p.m. Sunday at 1812 Bayview Drive.

Carlson said the boy offered to back the truck from the driveway at 1813 Bayview Drive. Tappe was standing in the open driver’s side door of the truck and tried to stop the boy, but the boy accelerated in reverse, dragging his mother, Carlson said. 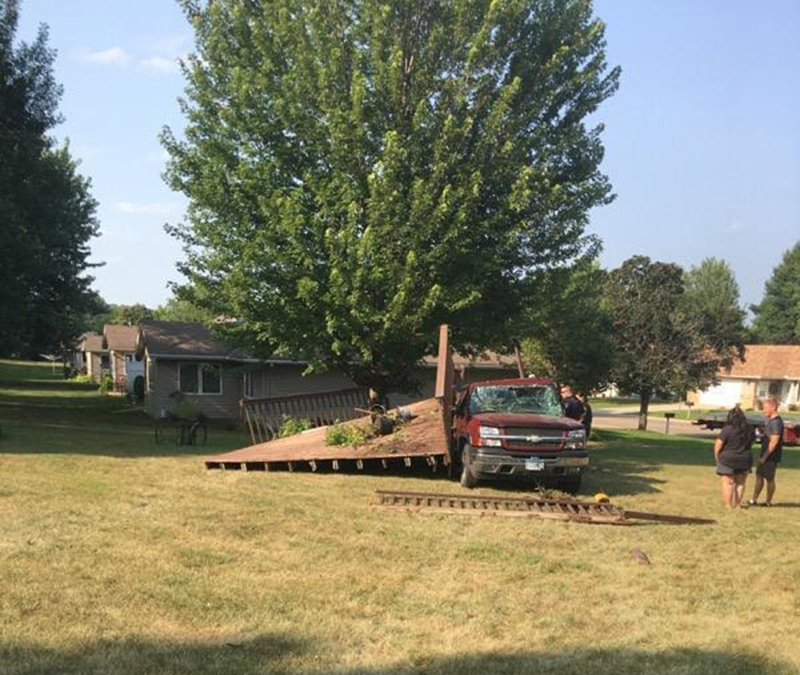 The truck crashed into the deck while in reverse. The incident was reported at 4:50 p.m. Sunday. – Provided

The vehicle continued in reverse, striking a tree and the deck connected to 1812 Bayview Drive, dislodging the deck from its foundation. Police said the truck stopped in the backyard of 1813 Bayview Drive.

Sue Horejsi, homeowner at 1812 Bayview Drive, expressed gratitude Monday that the crash was not worse, noting her daughter, Lindsey (Horejsi) Kozelsky, was on the deck 20 minutes before it was destroyed, picking tomatoes.

She said the truck would have struck Kozelsky’s room if it had taken a different angle.

She recalled the boy apologizing for striking her deck with the car, noting Tappe walked up her own driveway bleeding and telling Horejsi to call 911. Tappe’s husband then exited their house asking if everyone was OK.  Horejsi then called 911 from her home.

“It was crazy, that’s for sure,” Horejsi said. “It’s always the what-ifs.”

She said Tappe suffered a concussion and had cuts and bruises.

An Apple Valley woman was injured Monday morning after a vehicle she was in struck a guardrail on Interstate 35 in the Albert Lea area.

Barbara Lynn Nielsen, 64, was taken to Mayo Clinic Health System in Albert Lea with an injury deemed not life-threatening.

Katie Lynn Fildes, 33, of Fallon, Missouri, was driving a 2013 Nissan Pathfinder north on I-35 when she swerved to avoid what she thought was tire debris in the road, losing control and hitting the guardrail at 1:51 a.m. near the Freeborn County Road 46 exit, according to the Minnesota State Patrol.

Fildes and the second passenger in the vehicle, Kevin Richard Nielsen, 66, of St. Charles, Missouri, were not injured in the crash.

Alcohol was not a factor in the crash, and all involved were wearing their seat belts, the report states.