A year after severe outbreak, more Somali-American children are vaccinated against measles 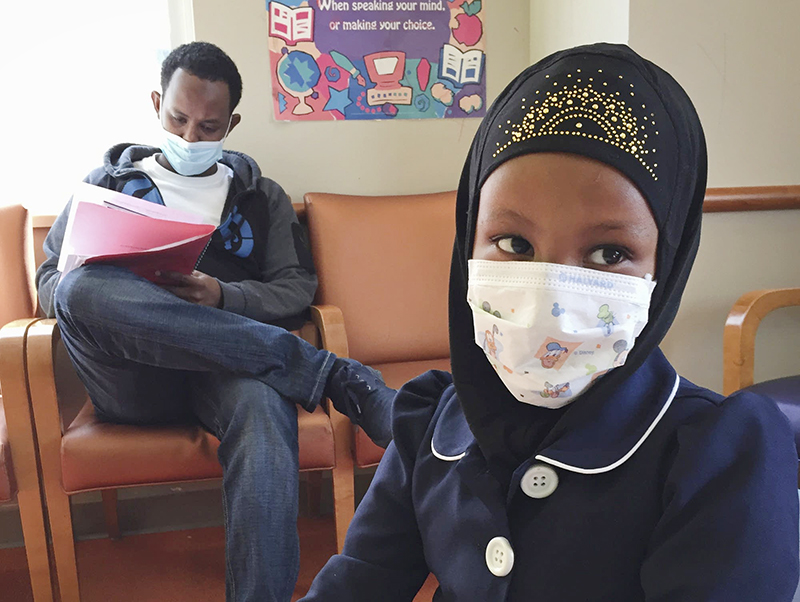 Amira Hassan of Burnsville plays in the waiting room at the specialty clinic of Children’s Minnesota in Minneapolis while her dad, Mohamud Hassan, fills out paperwork. - Amy Forliti/Associated Press via MPR News

This Saturday will mark a year since Minnesota experienced its most severe measles outbreak in recent history, and public health officials are still trying to get the word out about measles vaccinations.

Last year, the state had 75 cases of the disease, making it the largest outbreak since 1990. Almost a third of those patients got so sick that they were hospitalized. Even though there is an effective measles vaccine, health officials said 91 percent of those who came down with the disease last year were not vaccinated against the disease.

Have measles cases been discovered in Minnesota this year?

Public health officials said that these most recent cases are a good reminder that even if measles is rare in the U.S., it’s still important to get the vaccine because travelers can carry it with them and infect people who haven’t had the shots.

Are vaccination rates up this year?

Among Somali-American children, where last year’s outbreak was centered, they are.

At the time of last year’s outbreak, the vaccine coverage rate for Somali-American children was 42 percent and this year it’s about 58 percent.

The measles vaccination rate for non-Somali-American children is about 91 percent.

Why are fewer Somali-American children vaccinated?

A higher rate of Somali-American parents suspect vaccines cause autism. That’s not backed-up by science, but the myth has been perpetuated in the community by anti-vaccine groups and advocates.

So before and after last year’s outbreak, the health department worked to educate Somali-American parents about the measles vaccine.

What has changed since last year?

In the 2017 legislative session, legislators created a $5 million fund meant exclusively to combat major infectious disease outbreaks. That’s because infectious diseases can strike quickly and unexpectedly and they require a rapid response. Some of that money has been used to target measles outbreaks.

At the same time, the legislature changed the state’s quarantine statute. Previously, the law only provided quarantine protections to individuals with infectious diseases. But that proves problematic when kids are the ones being quarantined because they need an adult to stay at home with them. So the language was changed to extend those protections to caregivers and guardians as well.

What are some of the ongoing challenges the health department sees when it comes to preventing measles outbreaks?

Health officials said the biggest challenge is that they can’t rest on their laurels. Children across the state are being born every day, and the goal is for 100 percent coverage.

But specifically in the Somali-American community, these long-standing fears about the false link between vaccines and autism continue to be difficult to overcome.

That said, public health officials said they’ve learned a lot when it comes to talking about immunizations with members of the Somali-American community. For instance, focusing on debunking the link between vaccines and autism wasn’t very effective. Public health officials said they learned that they needed to talk about child development more broadly and then talk about vaccines.

Meanwhile, the health department has added Somali-American outreach workers. And they continue to enlist help from faith leaders, which seems to have been effective because they play a critical role in disseminating accurate information.