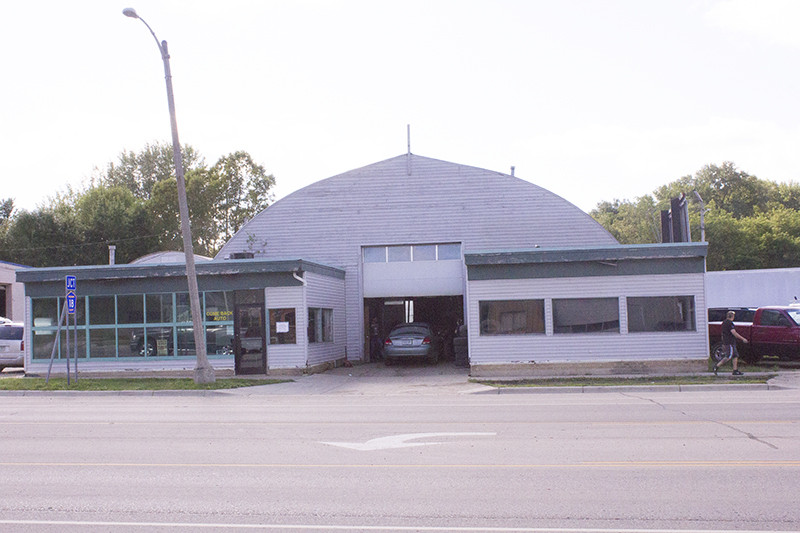 The building Comeback Auto is in, at 1118 S. Broadway Ave., is targeted for abatement by the Albert Lea City Council. Owner Donald Jensen plans to fight the abatement in court. - Sam Wilmes/Albert Lea Tribune

“Removal of the structure is recommended because the roof is failing, there is laminate beam-to-plate failure, truss failure, unsafe temporary beam system, unsafe storage of gas cans and unsafe and excessive amounts of tires stored inside, outside and piled,” City Manager Chad Adams said. “The property is also a public nuisance that needs to be abated.”

Albert Lea Deputy Fire Chief Jeff Laskowske said because of the abundance of tires outside the building, any fire there would not be easily extinguished.

“There isn’t enough foam in southeastern Minnesota to be able to put this fire out once it starts,” he said.

To Laskowske, a fire at Comeback Auto would likely result in the evacuation of up to 500 homes, depending on wind direction and speed, because of the fire’s effect on the environment. He said the fire would likely need to extinguish itself.

Albert Lea Building Official and Planning and Zoning officer Wayne Sorensen said he has been informed by Comeback Auto owner Donald Jensen that building codes make it too expensive for him to build in Albert Lea.

Jensen said Wednesday that $7,000 has been spent repairing the building, repairs that resulted in two cracked rafters. He said the city informed him he could not fix the rafters himself and would need a professional to evaluate it.

He said the city entered the building when he was not there.

“We don’t have any rights anymore,” said Jensen, who plans to fight the abatement in court. 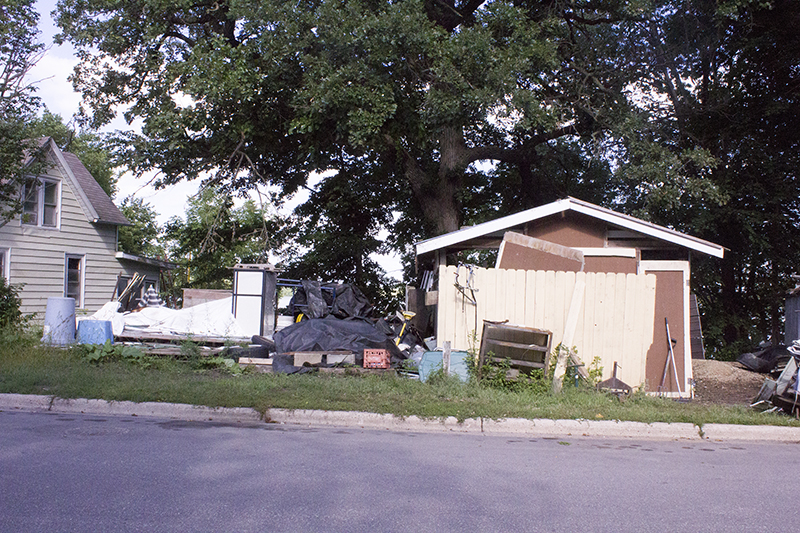 He said the amount of tires at the building has been drastically reduced since the city’s inspection and expressed optimism he would be able to stop the abatement.

“I can fix the building, that’s no problem,” he said.

Jensen, who did not attend Monday’s meeting, said contractors told him the building is in too good of shape to be torn down.

Albert Lea 5th Ward Councilor Robert Rasmussen questioned how Jensen allows anyone in his facility based on its condition.

“I don’t know why anyone would even feel comfortable having somebody in that structure, just the liability,” he said.

Sixth Ward Councilor Al “Minnow” Brooks said Jensen is probably aware of the poor condition of the structure but believes he is a business owner who is providing an essential service for customers and is being treated unfairly by the city.

Third Ward Councilor Jason Howland said Jensen has had six years to clean his facility since the city notified him the building needs to be cleaned.

Howland said the city is not picking on business owners.

“I don’t have any sympathy for someone like that, if that’s the response,” he said of Brooks’ interpretation of Jensen’s feelings about the city.

Councilors authorized the removal of the structure at 1125 Frank Hall Drive by a 6-1 vote.

In voting no, Brooks said a local engineer in 2015 said the foundation of the house is sound.

“By no means am I disputing Wayne’s credibility as our staff person, as an engineer,” he said. “I’m just questioning the whole process.

“We’re not always right. And right now we’re going by a visual, a visual reading of this foundation from the city, which is fine, and also have a visual, individual, licensed engineer stating that the foundation is OK. But we’re creating this, where we’re making him sign something and also stating that the abstract doesn’t account for anything, and it just kind of bothers me.”

Sorensen said he does not want to tear the structure down.

“I just want to make sure it is safe,” he said. “It is on a very steep slope. Under building code, under today’s standards, you could not even build on that slope, so I have a lot of concern about where it is sitting.”

In addressing the council, Katherine Skaar-Garner apologized for the state of her property and requested councilors separate abating the foundation of the back patio from the rest of the structure. She said an engineer found in September 2015 that the house’s basement, outside entry and court exceeded minimum building codes, adding Brian Johnson, principal engineer at Jones, Haugh & Smith, found the patio foundation was not failing last October.

Howland said if an engineer chooses not to sign a required form saying the structure is safe,  city staff could be correct in their assessment of the structure.

Skaar-Garner was advised of public nuisance violations on the property and the need to abate the nuisances on Jan. 26, 2017, Adams said.

“The property owner cleaned up the property and then later added additional items,” he said. “The owner was once again advised of the nuisances on June 20, 2017, without any abatement. Adams said Skaar-Garner was advised of accessory structure violations a third time in August 2017 and requested to submit a plan on how she would fix the violations.

A cease-and-desist letter was mailed to Skaar-Garner June 12, ordering the abatement of violations.

Howland said the city is trying to take a harder stance on nuisance properties.

“I understand that Councilor Brooks wants to represent his constituents, but we just have to take a stance as a city, and we are trying to do that more and more with these nuisance properties,” he said.

The mayor said abating the building is about the safety of the residents of the house.

Nick Ronnenberg, a neighbor, said he is concerned that everyone can see the abundance of refuse on the property, adding the Garners have had nearly two years to address the issue. He said he attended the meeting to show support for the homeowners.

Councilors unanimously ordered the removal of a burned structure at 803 Bridge Ave., after it was placarded as unfit for human habitation in August 2016.

Albert Lea Director of Public Safety J.D. Carlson said all three properties have been “long-standing concerns” of the police and fire departments.

A document stating a structure is sound — with an engineer’s signature — will be needed for the property owners to end proceedings.