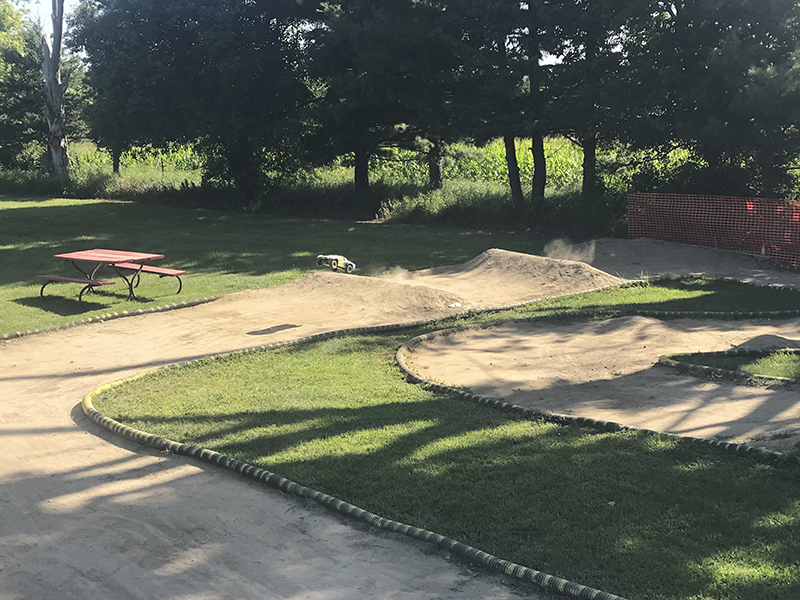 A remote-controlled vehicle operated by Justin Dokken gets some air at his RC track in Clarks Grove. - Kelly Wassenberg/Albert Lea Tribune

CLARKS GROVE — After being gone for over a decade, an area native has returned to establish a new family-friendly attraction in Clarks Grove.

Justin Dokken, 47, was born and raised in Albert Lea before a job opportunity took him to Colorado 15 years ago. A longing to be closer to family brought him back along with his two sons, Drew, 17, and Caleb, 16, two years ago, but they didn’t come alone. Dokken also brought back his passion for racing radio-controlled cars with him.

Dokken was first introduced to the hobby in Albert Lea when he was about 18, but his first experiences with RC racing were in Colorado.

“It was huge out there,” Dokken said.

Upon returning to the area, he struggled to find a suitable race track, so he built one of his own and started the Southern Minnesota RC Club. The track is located behind the Gopher Stop in Clarks Grove and is open during daylight hours, seven days a week. While Dokken might not be on hand, members of the club who have paid their yearly donation fee have access to the track and nonmembers can pay the practice donation fee of $5 per day to use the track behind the gas station.

Dokken refers to the fees as donations because he said all the money from memberships and use of the track goes back into maintenance of the site and prizes, which are given away during Saturday races beginning at 5:30 p.m.

He also has a shop on the property that houses his own personal collection.

“I buy, trade and sell all the time,” Dokken said.

Along with keeping a variety of models of RC cars to rent out for the day, he also carries a variety of parts so customers can upgrade or repair their vehicles on site.

The group and the track have already created a following. A couple hundred people follow his Facebook page and about 50 people come out and use the track some time during the week.

Dokken said he has about six to seven different racing classes and he decides when it’s time for a driver to be moved to a more advanced class.

“I want to keep it fair and competitive between classes.”

That doesn’t mean he takes it easy on beginners, though.

“We don’t cut any corners for them,” he said. “They learn to run the whole track just like anyone else.”

To learn more about the Southern Minnesota RC Club, visit the group’s Facebook page or contact Dokken at 507-391-2061.