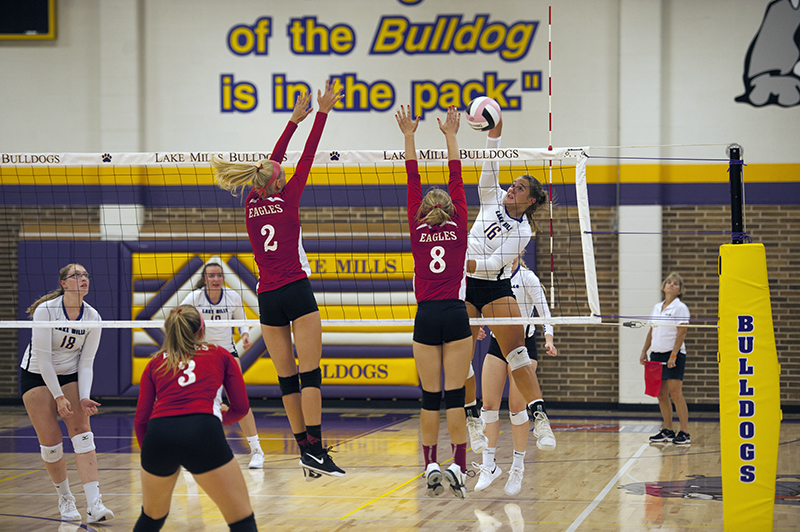 Lake Mills sophomore Kylie Greenfield throws the hammer to record one of her 11 kills against West Hancock Thursday night. The Bulldogs would go on to beat the Eagles in straight sets, 25-8, 25-10, 25-16. - Tyler Julson/Albert Lea Tribune

LAKE MILLS — The Lake Mills volleyball team got its season off to a hot start when it hosted West Hancock Thursday night. 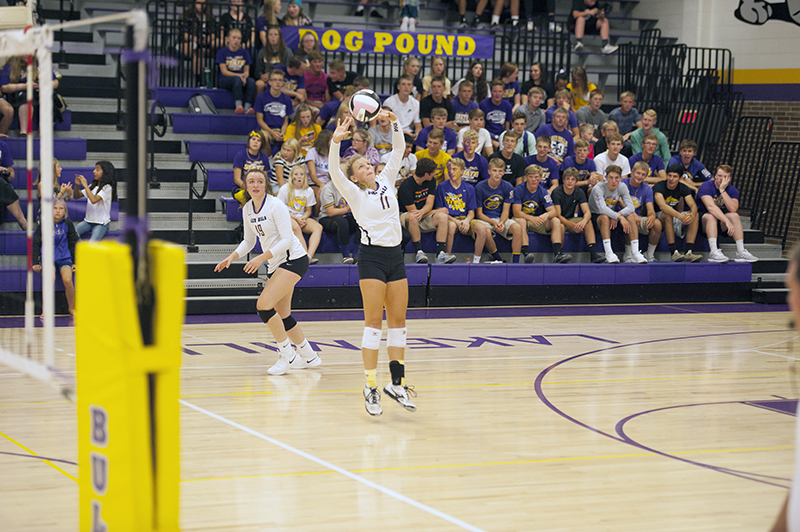 Lake Mills junior Jessa Gasteiger sets up one of her teammates for a kill Thursday night at home. Gasteiger would finish the night with 24 assists. – Tyler Julson/Albert Lea Tribune

Both teams traded points in the opening portion of the first set. They were fairly even until Lake Mills found its stride, using a 17-3 run to pull away and take the first set by 17 points. The team was put over the top by stellar serving and setting by junior Jessa Gasteiger.

Through the night, Gasteiger was a perfect 15-15 from the service line while also recording 10 aces. She also got a nice start to her assist total with 24.

Head coach Jim Boehmer was pleased with the way his team came out and played, especially with the inexperienced varsity players.

“I was happy with the way this new group played together tonight,” he said. “We only have two girls on the floor this year that saw any varsity action last year for us. We knew we would have a lot of new faces.” 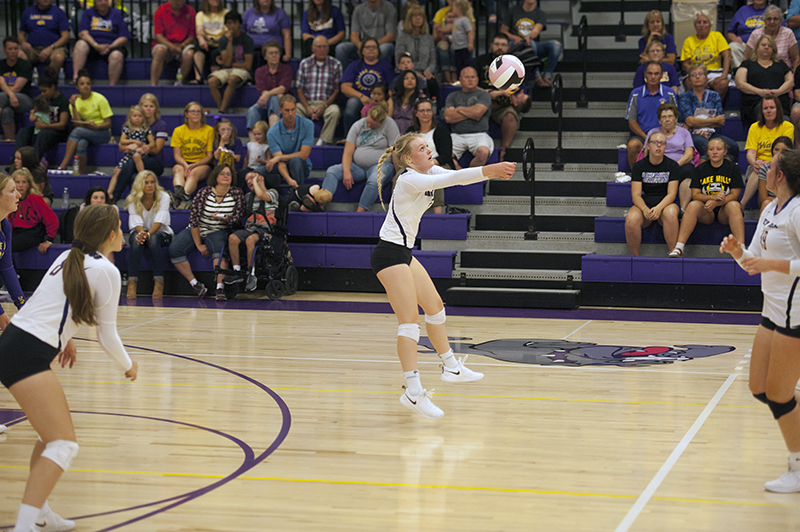 Lake Mills senior Audrey Casperson returns a serve Thursday night against West Hancock. Casperson would hit a momentum-swinging kill in the third set to give the Bulldogs a boost to the win. – Tyler Julson/Albert Lea Tirbune

It was a lot more of the same for the Bulldogs in the second set. They were able to outplay the Eagles in every way, taking a commanding lead in the match two sets to none. The second set was dominated by the net play of senior Hannah Hanson and sophomore Kylie Greenfield. Hanson finished the night recording 10 kills, three blocks and a hit efficiency of .333. Greenfield stepped up with 11 kills and a .350 hitting efficiency.

“I felt like we were aggressive and played with a lot of passion and energy,” Boehmer said. “We were trying to run a quick tempo and made some nice adjustments.”

It seemed as though the last set would just be a formality for the Bulldogs after they jumped out to a 14-7 lead. However, the Eagles weren’t ready to lay down just yet, as they climbed their way back into the game — closing the gap to 15-12.

It looked like the momentum was shifting West Hancock’s way when Lake Mills senior Audrey Casperson shut down the rally attempt with a booming kill. The Bulldogs then went on a 10-4 run to close out West Hancock once and for all, 3-0. 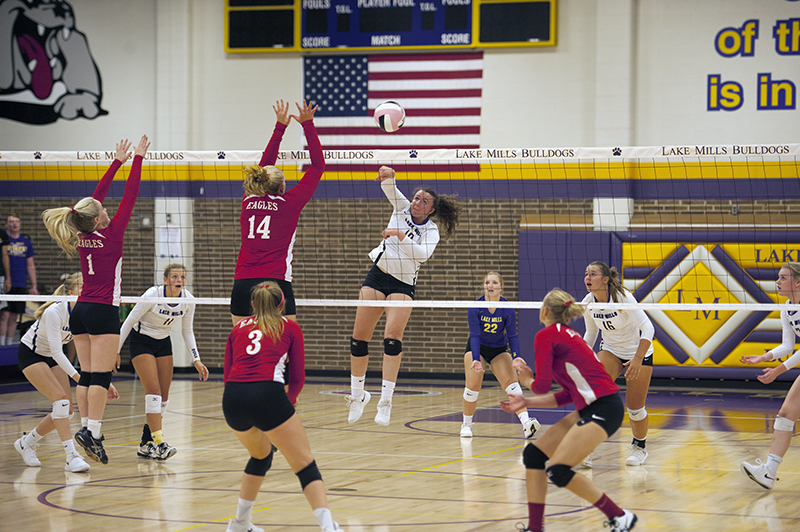 “We still have a long way to go and have to work to get better each night in practice,” Boehmer said. “We can’t wait for match nights to improve. If we look for ways to get better and work hard, we can be a much better team yet. But with that said, tonight helped me see the potential this team has.”

Other stats on the night included Kristyn Throne also being perfect from the service line, 17-17 with four aces. Audrey Casperson was 14-15 from the line and Hanson had five aces. As a team, the Bulldogs had 30 kills nd a 93 percent serving success rate, and recorded 24 aces.

“Jessa served amazing and did a great job running the offense,” Boehmer said. “Kylie stepped into her role very well tonight and showed that she can be an offensive power when she plays under control. Hannah is someone we expect to be dominate after what she did for us last year.  She could be a force in the front row.

“I am happy with how all the seniors stepped up and provided energy with their role. Kristyn earned that libero uniform in the preseason, so I am very happy with her level of play.”

The Bulldogs will be back in action Tuesday when they travel to play the Belmond-Klemme Broncos. 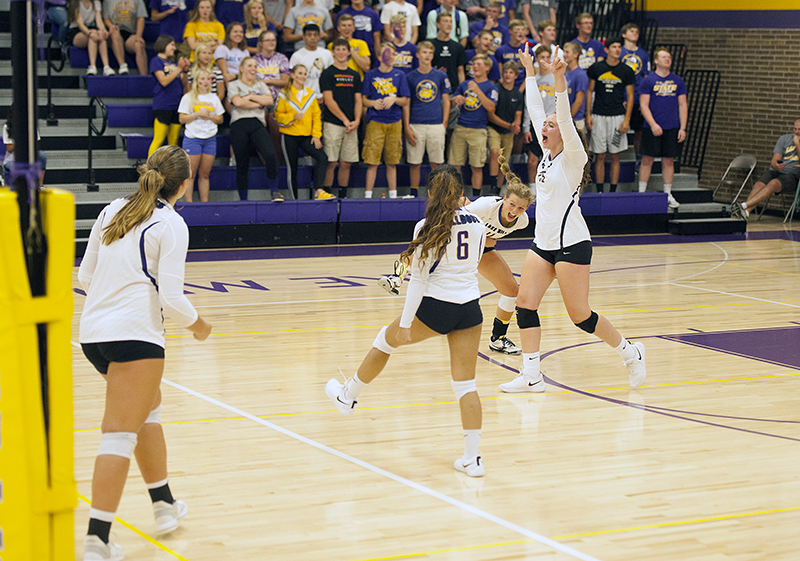